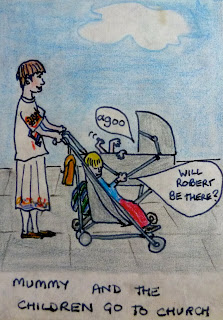 I had a wonderful folding double buggy.  Sam at four had little energy due to his heart trouble, so he still had to use it unless we were prepared to stroll very slowly.  The pavements were not as wide as shown, I had to choose my route to school and church carefully or I couldn't get through.  On one part of the road we lived in I had to cross over because the lamp posts were too close to the garden walls.  I used to get Sam out of the buggy and partially fold his side to get through the bollards at the end of the lane near the school.  It didn't fit in the lifts in John Lewis either!


When children ask questions like this I think it is ok if your mind goes blank. 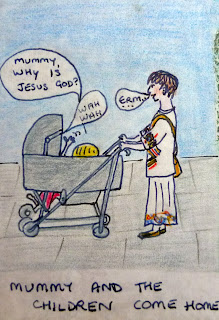 Mine always did anyway.  Babies crying have the same effect on my intellect, so both at once is bound to do it.

Church was nice and close.  Sam was very friendly with the vicar's son Robert.  They used to chase each other round the pews after the service.  Robert used to let Sam win by taking short cuts.  He was a kind child.  Just before Sam had his second operation, the vicar came to bless him and left the communion bread unattended for a moment.  Sam and Robert scoffed the lot!   Blessed inside and out!

It was surreal having a blessing for Sam at home.  Everything was surreal at that time.  We didn't know much about how risky his condition was and just accepted things as they were.  Looking back that was probably just as well, but after his operation we went into shock for at least 2 years. 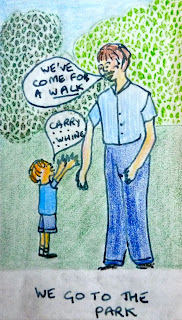 We took Sam for walks and outings but he was easily tired.   He could whine for England but we tried not to give in more than was good for him.  It is so hard as a parent to always do the right thing instead of the easy thing.

Luckily we lived close to some fantastic parks and gardens.  This one is Richmond park which is the largest royal park in London and dates from the 1600s when Charles 1 created it as a deer park.   The deer are still there and being a Narnia fan, Sam looked out for a white stag to wish on every time we went.

We often went to Kew Gardens as well especially if it was cold because the glass houses were lovely - they always smelled of summer and exotic flowers.  They had orchid shows there which took your breath away.  Still do in fact.

Richmond Park also had a good cafe at Pembroke Lodge so we could recover over a cup of tea and gaze out over the terrace at the beautiful view from Richmond Hill.  It is still one of my favourite places to have tea.