These balloons were left over from Christmas and Sam's birthday in September. You can just see one behind him on the floor.  He played with them so much we thought it was a good idea to leave them.  They really got dreadfully in the way but that is the sort of thing you do for your kids!  By May when George was born we had managed to get rid of them.

It made Sam feel powerful and big to run through them screaming and shouting because they all moved so easily - it was such fun to watch.  He did it every morning before breakfast and whenever he came into the dining room.  I bet the neighbours thought terrible things about us!

Very traditionally, he adored Marmite soldiers, which is what I have drawn him eating.  He didn't always have boiled egg with them to dip into because it used to get everywhere and I didn't like washing the walls and his hair! 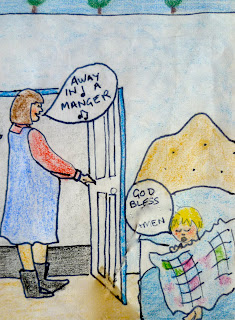 Sam was good about going to bed.  These were his last few nights in his nursery bedroom.  His new grown up (but sadly pink) room was almost ready.  We just had to move the bed and tidy up a bit. I was too pregnant to do any work, at least that was my excuse!  Sam's room had been the spare room for a while so it had the tumble dryer in, with a pongo (big hose) going out of the window when it was in use. He was thrilled by this and used to sit next to it resting his back on it when it was on, like a mini massage.  We had no room for it in our tiny kitchen.  It was a trial to me as I intensely dislike having kitchen/laundry appliances in the wrong place.  We had a spare fridge in the lounge once - awful.