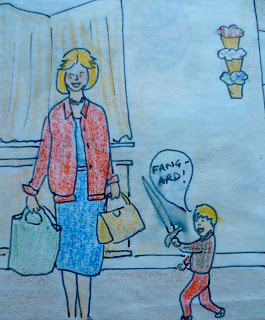 On Fridays Auntie Carol, my sister, came to see us for tea.  She was and is a very pretty girl (I still think of her as a girl despite the 53 years I have known her!).  I was always so jealous of her almost white blond hair.  I only had a yellow pencil so that's why it's like that in the picture.  By the way, Sam had white blond hair as well.  He still has it, and the most gorgeous blue film star eyes you ever saw.  He would say that his luck gave out after that!

He waved his sword at everyone.  He has a full sized replica claymore now, which he still waves about from time to time, but not unless he is a long way from everyone else!  As he is still only 26 I have put it in the loft until he is more mature. 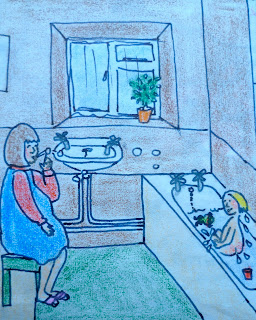 Sam was at this time waiting for his first bout of heart surgery.  We had to wait for his lungs to grow after he had his lung artery improved when he was 18 months old.  He was supposed to blow the bubbles to help his lungs, so I used to get a few going as he wasn't very good at getting them big enough to float around.  I used to let him have a go too.  Eventually.  Honest.

That bathroom!  Horrible, cold place with three outside walls and a flat roof!  The walls are brown because, in a vain attempt to warm it up and insulate it, we put  cork floor tiles on all the walls.  Probably should have bought a lighter shade.

The carpet was made of vile rubber-backed felt tiles that moved around if you couldn't walk like a ninja.  No one in our family has ever walked like a ninja. 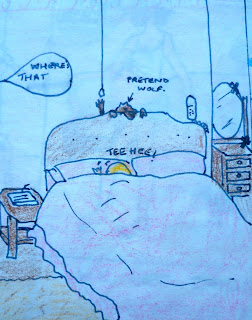 Wolf games!  Sam always played this game in our bed.  When he came in to our room first thing he would snuggle in and start.  "Ssh!  What is it?  It's a wolf!  Quick, hide!" It involved us all getting under the covers and being very quiet.  He never twigged that we were trying to go back to sleep!  After a bit of snoring on our part, we would have to go and get breakfast, or if it was the weekend, drinks in bed.  Such luxury!

He was always trying to get a wolf game whenever he passed our bed. Especially if he knew it was his bedtime.  He would become very charming and use all the long words he could think of.  He hoped that we would be so fascinated, we would forget to send him to bed.  It didn't work. 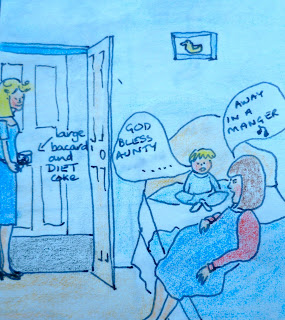 Sam was very insistent that Auntie Carol  had to come up and listen to him saying his prayers.  He usually put her in anyway, but I think he wanted her to know!

There were three songs that HAD to be sung before he could go to sleep.  Away in a Manger, even in the height of summer, a little lullaby called Sleep Gently My Own One and Stay Awake from Mary Poppins.  After I had sung these he was out for the count in seconds.  It was like Pavlov's dogs, just sing the songs and he would sleep anywhere!

I think Carol was dieting...
Posted by Strawberrysoo at 10:42