This is a Sunday just after George, my second was born in May 1990.  He weighed 10lb so it was a real relief to be able to put him down! That is 4.54kg in metric.  (I do wish the government would choose one or the other - it is so confusing with recipes and dressmaking, not to mention my weight.  No matter what, I always seem to need my weight in kg when I can only remember it in stones and pounds, and vice versa. Rant over!)

I absolutely loved this room.  It was heavenly sitting in there with a warm baby, reading a book or just staring at the pretty lights on the ceiling from his night light.  I didn't even mind the night feeds too much.  I knew a bit more what to expect by the time I had the second one. Still tiring though.

George was a much easier baby to look after than Sam.  He liked his feeds, he only cried when he had a pain and was generally pretty happy.  He also didn't have anything wrong with his heart, which was a great bonus.  Consequently we took our eye off the ball with him as we thought he was fine.  Bit of a mistake as it turned out, but more of that later!

I look a bit spaced in this picture.  I was probably half asleep.


In the picture below, it was about 7am, which is far too early to get up in my opinion, especially if you have been up twice to feed the baby already.  Jim was happily snoozling away, as he always did.  The floorboards were a dead give away and nothing would stop them squeaking.  We tried talcum powder, screwing them down, everything.  As soon as Sam heard the tell-tale sounds of movement from the boards he would be out of bed like a rocket.

Jim, as you can see sprang from sleep with a glad cry, whereas I was just getting snuggled down again for a nice little doze.  I was not a happy bunny, which is why Jim and Sam always went to get the drinks at the weekends.  It was sheer self-preservation on their part.

Jim always used odd little words to call us like "snooksy".  It is one of his endearing little traits.  He still sometimes calls me "socket set" for some unfathomable reason of his own. 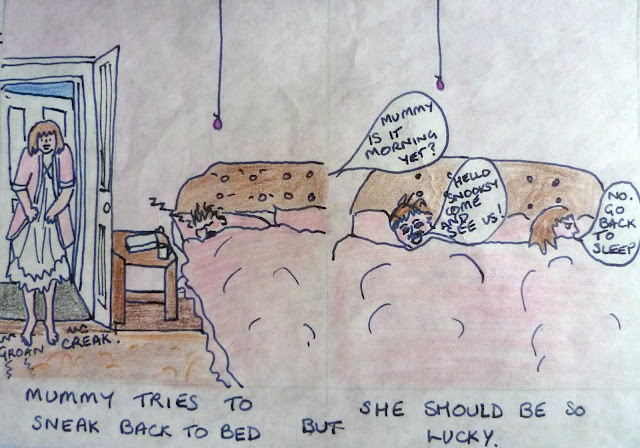