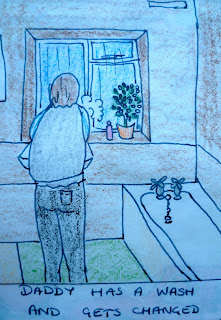 It was always nice when Jim came home.  When we were both working, we worked in the same part of London and travelled up and back together, as well as meeting for lunch.  We really missed that when I stopped work so any time together was very valuable.

We had been used to having dinner together after work, at around 8pm.  When Sam arrived, we used to give him nursery tea at 5.30, then Jim would cook something for us later.   In retrospect, this was a bad idea as it was too easy to get into the habit of not eating with Sam.  We did eat together on  Fridays and all weekend though, so we tried. 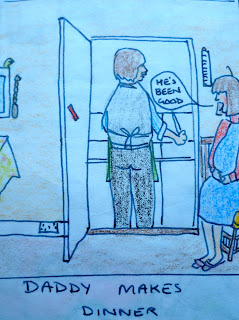 It looks like Jim is standing in a dip here!  I am afraid it is just bad drawing, although the kitchen did have a 3 inch step down because it used to be the scullery.

The house was built in 1902, so originally had no bathroom or indoor toilet.  There was a coal hole in the kitchen when we moved in, and a large double coal bunker in the garden.  All the fireplaces were still intact so if there was a power cut, we were ok.  The one in the dining room smoked terribly, but also gave out a lot of heat. We really only used the one in the lounge, which was a good drawer.

Even Sam's tiny bedroom had a small cast iron fireplace with a mini hearth about 18 inches square.  It had a cast iron flap in the flue which you could close to stop draughts.


Jim was desperate to spend time playing with Sam.  He would play with the Lego as soon as he could after work.  Most of the fun for me was listening to them talk together - Sam was like a little old man in the way he spoke sometimes.  I think Jim played with Sam more than most fathers because he felt he never had enough attention from his parents as a child, so he wanted to make sure his children were not deprived of his time. 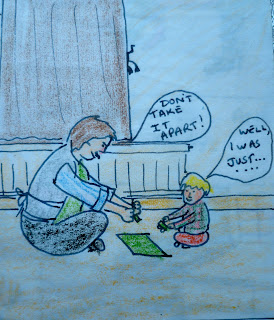