You've got to love Duplo!   Jim and Sam used to make humongous creations with as many of the bricks as possible.  The idea was to make something that would move on wheels but be really big as well.  It took hours.  Later we got the train set to go with the bricks and it went all over the lounge in and out of the chair legs.  Great fun.

We had net curtains!  I know, I know, design disaster!  Just remember we were a few years post brown paintwork and macrame plant baskets so we can be forgiven the occasional mistake.  We were only 4ft from the pavement (sidewalk - in case you are reading this in the US) so any passer by could look in on our antics.  Privacy seemed necessary so we had nets.

My grandmother taught me how to wash nets.  I used to take them down (not nearly often enough she said) amid clouds of dust and shake them in the garden.  Then I would lay them, neatly folded, in luke warm water in the bath and drain the dark grey water until it looked clear, then wash with mild soap and Reckitt's blue bag.  After that I would convey them dripping to the garden and hang them to dry very carefully keeping them flat.  How we lived!  I found later that machine washing was better in every way, but I was young and obedient.  I think my grandmother sometimes forgot that we were not living in 1935.  She definitely believed in doing things the hard way! 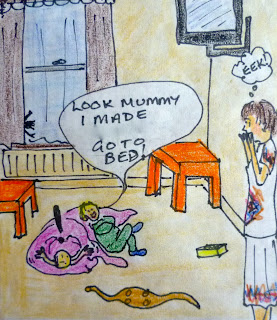 I left the baby quietly lying on his eiderdown. This was a rookie error.  Sam happened to him.  No harm done, but that was just luck!  I didn't leave them alone together again for a good long time.  George got his own back later when he grew past Sam in height by the age of 10.  Sam was  gutted!

The orange tables came from somewhere like Habitat for £1.99 each.  We had four.  Twenty odd years later we still have two in the garden.  They were really that colour and they were plastic.  Brilliant for picnic tea in the lounge for the kids.  One Christmas we had 20 people at Mum's for Boxing day lunch.  We put the four smallest kids in the hallway on cushions on the floor round these little tables all done out with a white tablecloth and table napkins. They even had a table centre.   They loved it, and they could pretend to be grownup and talk about Lego as much as they liked. We loved it because the mess from their dinner was out of sight so we could safely ignore it until later!   I still haven't got the stains out of the tablecloth...