Why I tell stories about bears and strawberry dragons 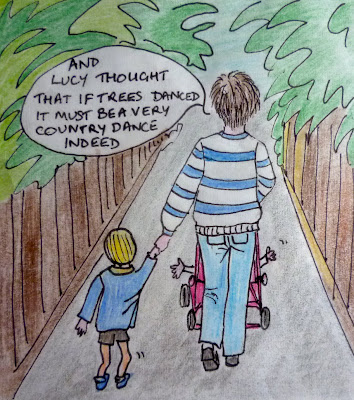 Years ago when my kids were small, I had a long walk to school.  Sam was 6, and George was 2.  Because Sam was ill and couldn't walk fast, I had to find a way of taking his mind off the walk.  A captive audience!

At first I told them stories from books I had read, but after a while I started telling them stories with them as characters, or with special characters I made up.  It was a joke to begin a story with "Once upon a time, there were three bears, a mummy bear, a daddy bear and a baby bear" then go off on a wild flight of fantasy.  Children are so accepting of anything that I was encouraged to be as surreal as I liked.

Soon, I got an allotment, and to keep them interested while I dug up weeds was a challenge.  I invented the strawberry dragons.

When  Clara was born, two years later,  the three bears and the strawberry dragons really came into their own.

The cartoons were invented originally to teach Sam what happened on which day.  This is just one of the many it took!  It is not my first, but it shows us telling stories.  This is from "Prince Caspian"  by C S Lewis.