More cartoons from a Thursday afternoon in 1990

This is more of a Thursday.

I suppose it's rather sad, but I still have the paintings...

On the plus side, I was very brave a few years ago and threw away their baby teeth. 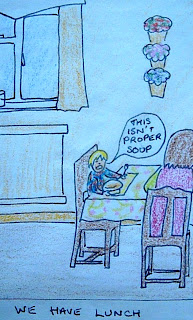 We had 1940s hardboard pelmets!  I liked them because someone had included curtain pulls and metal curtain rails which were really strong and worked smoothly every time.  I never liked things which broke too easily.  Comes from being a bit heavy handed I suppose.

Sam was a creature of habit and soup meant Heinz tomato.  No other would do, but we kept on giving new ones to him anyway.  Sigh.

He had one of those square yellow plastic seats to sit up to the table with us.  Weetabix sets like a rock when it is dry.

I hope this picture is a bit of an exaggeration, but only adults who were over 5' 9"  could reach the TV.  I didn't really like TV much, Jim sneaked one into our house during our first year of marriage, and I never forgot it!

Sam was kept on short commons as far as TV went.  I chose what he watched and usually watched it with him.  He was very fond of the Disney Robin Hood at the time.  Later we had trouble when he watched Sleeping Beauty too often and started behaving like the "bad guys" and hitting people.  Luckily he was too small and weak to hurt us, but he meant to!  We stopped him watching that for a while.

I still think it is a good idea to be very careful what you put into kids' heads at a young age.