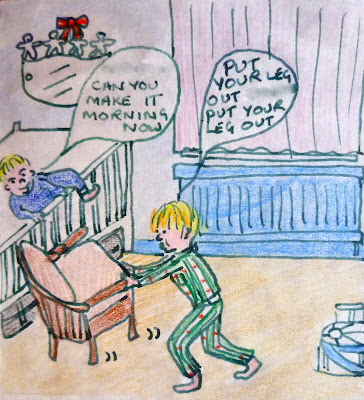 George was convinced that Sam was omnipotent so "making it morning" was quite easy for him.  Getting George out of his cot, opening the curtains and taking him into Mummy and Daddy's room was something only the most godlike people (Mummy, Daddy and Sam) could do.  This lovely strategy gave us at least three or four extra precious seconds in bed!

I was charmed by this and pleased to think that George so looked up to his brother.  I felt it would be good for Sam to have that responsibility for someone.  In a way that was a bit too much to hope for, as Sam took full advantage on some occasions and took it all far too seriously on others.  Sometimes, Sam would lie outrageously to George, making him believe all sorts of appalling things. At another time,  Sam went into hysterics when we insisted on taking George into a military museum at Duxford, which sported a tongue-in-cheek notice  "children found climbing on the exhibits will be shot on sight".  Sam truly believed that we would not be able to restrain George from climbing on the tanks and therefore being shot... 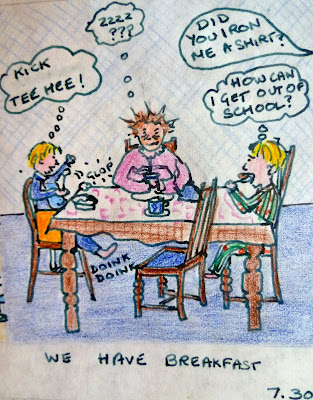 Actually I am quite lively in the mornings.  The sleepiness in this picture is caused by lack of sleep. George was apt to wake in the night for extra food.  On advice from the health visitor, we never gave it to him after our bedtime at about 11pm.  The idea was that if you didn't ever give in to the child at night,  he would stop waking. It took some months of screaming vainly for milk to convince George that it wasn't going to happen.  In the meantime I became sleep deprived and forgetful.

I hated ironing shirts anyway so they were the easiest things to forget!  At one awful stage of my career as a stay at home mum, I was ironing 15 white shirts a week.  I bless the person who decided that polo shirts were a good idea for school uniform!  Sam had shorts at this stage, but later the uniform changed to allow long trousers.They were made of grey flannel and were a pain in the neck as well.  George used to fall almost every day when he started school so there was always a pair in the sewing box waiting to be patched on both knees!  They ought to make school uniform trousers of something much tougher than wool. Kevlar maybe. 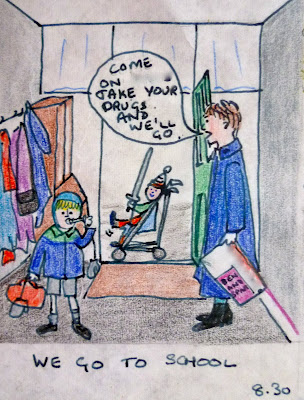 Sam had to take drugs every day to help his heart.  They tasted horrid but it had to be done.  We still have some of the tiny syringes I had to use to measure out 2ml of medicine. They come in handy for injecting mince pies with brandy!  I found out years later that you are supposed to brush your teeth afterwards.  Oh well.  He has a fine set now so no harm done.

Gloves on strings.  How cute.

George always liked to have something to wave about in the pushchair.  This was his favourite sword  at the time.  Shortly after it was a book about Captain Hook and then a Captain Hook finger puppet.  Big things were better.  The tiny finger puppet caused a long trek in the rain one day.  George was inconsolable one morning when we got home from taking Sam to school.  "Droptit!" was all I could get out of him.  Finally I realised the Hook puppet was missing and we set out in the rain and trudged our route to school.  We found him caught up with the twigs and rubbish of the deluge at the edge of a drain.  George took a fervent interest in the washing and drying of Hook, having him back before he was really ready.  Then it was time to go out into the murk again and fetch Sam.  A strangely unproductive morning.


Posted by Strawberrysoo at 08:35 No comments:

Growing up and hand me downs 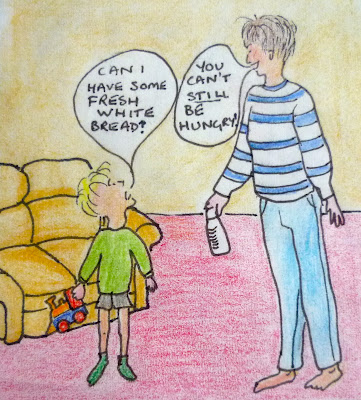 Sam got very hungry for certain things. He always asked for "fresh white bread" as if he thought I would give him stale brown bread by accident.   He seemed to be hungry all the time, but so was George so it may have been a competitive thing!  He certainly started to grow, I was forever finding clothes that didn't fit.  Luckily my friends from the babysitting circle had boys of the same age who were all a good bit larger, so we had hand me downs.  When the second group of kids came along, we had the same ones again doing the rounds between children.  It made it tricky to identify which child was which in group photos! 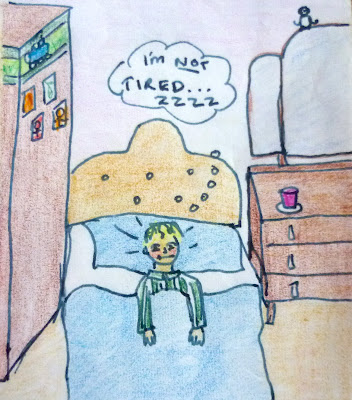 Sam was growing pretty fast for the first time in his life and had crept up from the 3rd centile in height to the 10th which was lovely.   George was born on the 97th centile and stayed there.  By the time George was four, he had overtaken Sam (who was eight) in size so Sam had to wear George's cast offs.  I don't think he has forgiven me even now.

Since his heart was functioning properly for the first time ever, Sam had the ooomph to do things without flaking out every few minutes.  He wanted to use his new found energy to do so much, he was suddenly and unexpectedly into everything, but his bedtime was still 7pm and he really needed it.

One day he came home from school in great excitement. "Mummy"  he pronounced in his precise little way, "if you get me the wood I will build a boat for the whole family, and we can go on the sea in it!"  I felt so sad to think that such enthusiasm and excitement would be crushed when he found out what the reality was.
Posted by Strawberrysoo at 06:29 1 comment: