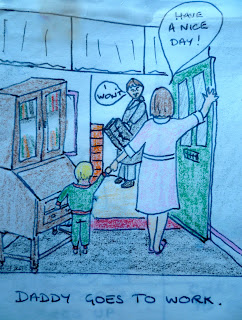 Now that I know what it is like to go off to work leaving everyone else in their pyjamas, I can see this in a different light!

It was very cosy and safe staying at home with Sam  Of course I missed having my career, but I would have missed Sam more, and it would have cost an arm and a leg to hire a nanny with nursing qualifications.  No one else would have taken him on with his heart problems.  It was strange, but I felt almost grateful that I had a "real" reason for giving up work to look after him.  On the day he was born, as soon as I saw him, I knew I didn't want to go back to work but I had already agreed to, so I believed I had no choice.  A doctor's letter saying he needed my care got me off the hook, and I never went back.  Being "just a housewife" was mostly fun, although there was an associated loss of status (and income!)

Playbus was Sam's favourite TV programme.  He would have watched it all day, but at the time I wouldn't let him.  The pixie-like thing poking out from behind the curtain is a Brownie.  I loved A A Milne and used to read "When We Were Very Young" to Chris sometimes.  He loved "Brownie", but was also a bit afraid of them.

"In the corner of the bedroom is a great big curtain,
Someone lives behind it, but I don't know who;
I think it is a Brownie, but I'm not quite certain.
(Nanny isn't certain, too.)

I looked behind the curtain, but he went so quickly -
Brownies never wait to say, "How do you do?"
They wriggle off at once because they're all so tickly
(Nanny says they're tickly too.)"

All our grandparents except Great Grandma were called Nanny and Grandad so he didn't realise it was a children's nurse.  He thought it was his Nanny, who was so famous that she was in a real book with poems and everything.  I made him a Brownie out of felt based on the book illustrations, and stuck it behind curtains for him to find. 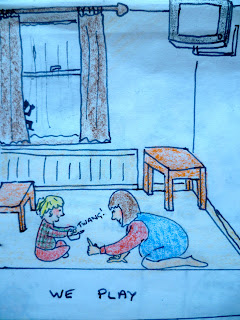 One episode of Playbus let me get washed and dressed - about half an hour I think, then I dressed Sam and we played.  I had a lovely selection of jumpers which my mum made for him.  She still likes to knit at 83, but then she was prolific.  He had a wonderful one with dinosaurs.

This was the day we made a matchbox guitar.  He was really excited to make and play his own musical instrument!

That Brownie certainly got around.