On Sundays I had a little lie in before I had to wake up properly. It was my treat!  Once again I have drawn the banisters very low, but they really were quite safe, honest!

Jim always had this fantasy that he would be someone who would have a library with a leather chair and an open fire.  His preferred attire would be a silk smoking jacket, and maybe a fez!  This dressing gown which I made him for his 32nd birthday was in the same vein.  It had yellow silk lapels and a yellow cord with tassels!  He does now actually own a fez (which he wears when the mood takes him) and a library.  Sadly the dressing gown no longer fits.

In the early 80s you could no longer get flying ducks for the stairs so we had ghastly padded silk pictures with frilly gold coloured frames.  My grandmother gave them to us for Christmas so we felt obliged to display them.  Shortly after this they met with an "accident"  and had to be thrown away.  Shame. 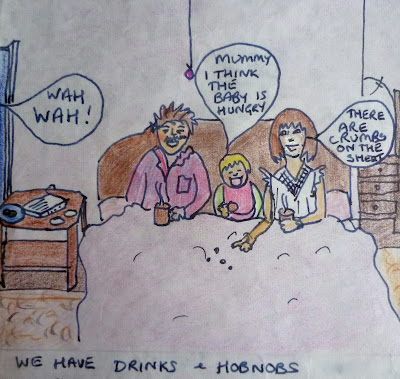 Here you see the delightful inch-deep shag-pile carpet so beloved of interior designers in the 70s.  This was a wedding present (from my grandmother again) which both Jim and I loved -  so much so that we brought it to all three of our homes when we moved.  I only got rid of it when it went bald in the middle.  It was all wool, thick, warm and luxurious. It was also the death of hoovers and harboured at least one evolving civilisation.


The rest of our bedroom had brown wood effect lino all over.  It was easy to clean.  Can't think of anything else nice to say about it.

All our furniture apart from the bed was second hand.  The little table from Jim's grandmother because she didn't like it, the three drawer dressing table from Jim's sister's bedroom after she left home and the wardrobe was a gigantic affair from my parents.  They got it in 1954 just after rationing finished and furniture was no longer "utility", so it had decorative mouldings and frilly handles.  I had the long side and Jim had the short side.  We also had a mahogany chest of drawers.  We fitted everything into the room.  We didn't have a lot of clothes so it was fine.