More cartoons from a Thursday morning in 1990 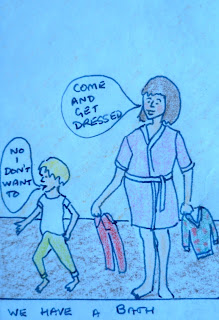 I am afraid my early cartoons were a bit basic, but hey, four year olds aren't that picky!  Sam was so excited to see himself doing stuff on a cartoon that he wanted more.  He even started giving me suggestions for pictures or events to put in.

He was a bit of a handful because he had worked out that I couldn't run after him so his answer to everything was "no" and running off laughing.  Getting him dressed was a bit of an issue which he found funny to see.  It was also a kind of picture diary for me and made me feel more patient about the whole thing.  This was the beginning of a long run of cartoons. 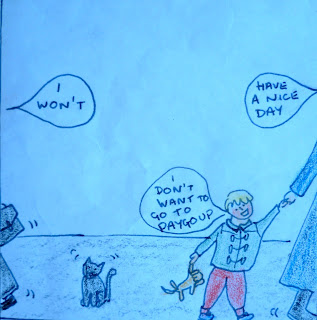 Big Playgroup was at the local church hall, St John's in Isleworth.  The cat is Kipper, our cat that was found wandering in King's College Hospital EEG department in London, and rescued from the vivisection labs they had back then by my sister in law who was passing.  He was a lovely cat who used to sit on the back of my shoulders or lie stretched out on my hands looking about a yard long.

With hindsight, quoting Reginald Perrin (Google it) every morning was probably not a good idea, but it was a joke which we didn't realise might be taken seriously by kids.  Sam now 26 still thinks in his heart of hearts that his dad hated work! 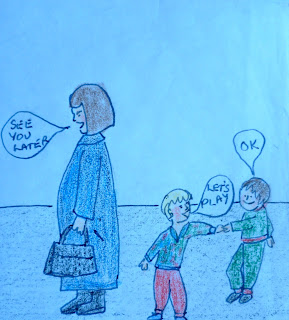 Sam's best friend was Robin the vicar's son.  Sam loved his mornings at playgroup and didn't seem to find it at all difficult to be left by me with other people.  I was very grateful for this at the time! 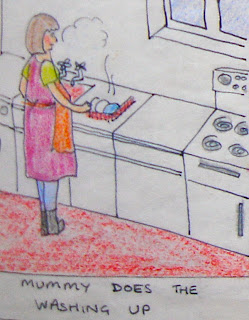 We had a lovely galley kitchen.  No dishwasher then of course.

It may be that the next few pictures are so that Sam knew I didn't disappear when I wasn't in his company, or so that Jim got some idea that I wasn't "resting" all day.  That was probably just my guilt trip because I don't think he ever said "what have you been doing all day?"  I just felt he might! 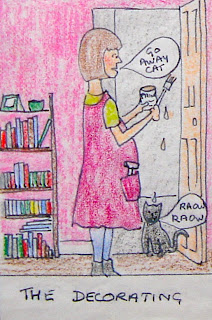 We were about to move Sam into the spare room to give him more space and make room for the new baby in the nursery.  We had a few names chosen, George or Rosemary or maybe Victoria, depending on how we felt on the day, and of course the sex of the baby.

Sam's room was a very bright pink, because the wallpaper had come from a shop that was closing down and was really cheap.  We compromised by putting a Thomas the Tank Engine frieze along the top of the wardrobe. 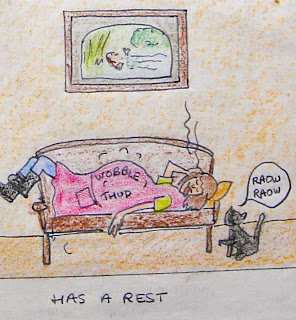 Being pregnant is so tiring, even when you are only 32 years old.  Cats are no respector of exhaustion.  Like children they want things exactly how and when they want it.  They can't see why the staff should be allowed to rest on the job!

Even at 7 months, this was a very big baby.  I was convinced he was going to be a footballer the amount of twizzlings and lunges I had from him!

That was our euphemistically named "cottage suite" sofa from Owen Owen.  It cost the princely sum of £125.  It was supposed to seat two, but they would have had to be quite slender.  The cushions were a bit thin and biscuity as well. They slid off if you sat down carelessly or wriggled to get comfortable.

The banana position for pregnant people. Head up, legs up. Lovely. 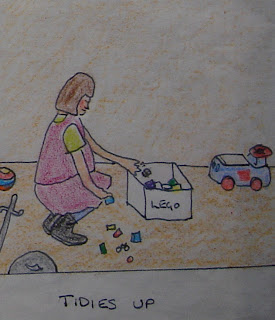 Lego was the main thing which got everywhere.  I had Lego when I was little so I got it for Sam.  They didn't have little men with hats and bicycles in my young day!
Posted by Strawberrysoo at 13:58