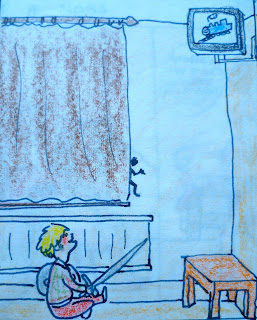 Here is Sam watching Thomas the Tank Engine.  He really liked dressing up as a brave knight in his play time.  He had a plastic breastplate as well.

That Brownie is still behind the curtain.  It was a bit like "Where's Wally" in these cartoons.

I haven't drawn in the video player, but I think that was just laziness on my part because it says he was watching a tape!

Fridays were quite busy because I was always trying to do everything so that we could go out at the weekend, when Jim was home. 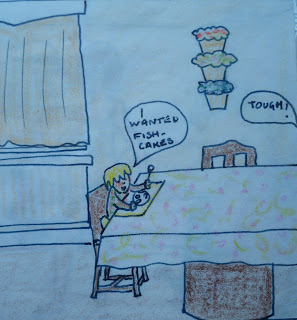 Sam liked most foods , but was ornery* and always took the opportunity to say he wanted something else.  Hence my rather harsh response!

Looks like he needed a haircut at the time this was drawn...

I have always hated washing up.

Especially weetabixy plates.  In fact any kind of plates.  Saucepans are pretty awful as well.  Don't much like washing up cups or mugs either.  Cutlery sucks.

On the other hand, dishwashers are wonderful.

* ornery means contrary in disposition, amongst other things.  It was a word my mother used to describe stubborn or difficult behaviour especially if it involved the word "no" from the child. 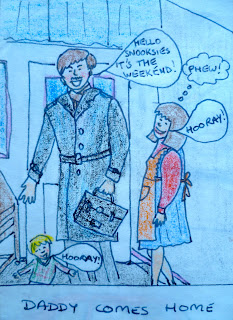 It was such a relief when Jim got home each night!  I was thrilled to have someone to look after Sam so I could go to the loo in peace, or rest.

Jim was a civil servant in those days and had a plastic official briefcase with EIIR stamped on it in gold paint.

I am wearing  a blue corduroy sack, and a 1970s recycled dress as a pinny.  I blame my grandmother for the pinny.  It came from a lovely and very expensive dress which I wore to a disco in 1975 with a date who was a student at the London School of Economics.  It wasn't a good disco, and he was an even worse date.  His breath smelled of Evo-stik -  I later found that all dates did after a few beers!  The dress was the best bit, and my mum at some stage gave it to my granny to make aprons.  I was gutted when I found out, and even getting one of the aprons didn't really help.  I still have the apron, and yes, I still wear it.