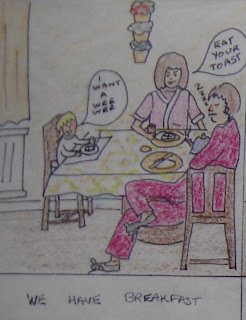 The simple captions were designed to help 4 year old Chris remember what we did each day, so that he could learn days of the week.  This was one of the first, breakfast on a Thursday in January 1990.  I was expecting Andrew.

Paul's slippers were truly awful.  Worn out and smelly.  He did not get any for Christmas that year, for some reason.

We had an almost completely inconvenient table with a huge round 1920s pedestal.  It meant you had to have it extended to avoid bumping your knees.  The ghastly thing on the wall behind my head was dried flowers.  I think their main purpose was to provide a nest site for spiders and dust.  We had a mix of hugely uncomfortable spine bruising chairs which came with the table, and slightly worn and splintery hand me down chairs from parents.  The brown 1960s carpet was left by the old lady who had the house before us.  It had a repellent pattern of orange and yellow circles.  There was also a 1950s tiled fireplace which smoked terribly, but having an open chimney flue in every room meant that the house was well ventilated, or "airy"  as the estate agent called it. Probably just as well with those slippers.  Funny what you can get used to.
Posted by Strawberrysoo at 15:01