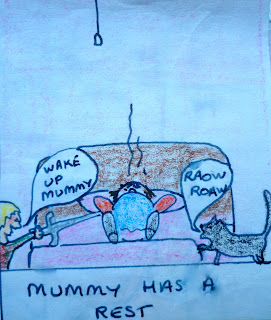 The plastic  sword was probably a mistake, but Sam loved the whole "brave knight" thing.

Isn't being pregnant with the second so much more difficult than the first?  I was in full time work in central London the first time and stopped 2 weeks before the baby was born.  It was fine.  He was 2 weeks early but I was a bit gung-ho about it all. Travelling on the train and tube in the rush hour through Clapham Junction was interesting, but I used my brief case as a shield and people were good about offering me a seat.  (Thank you, the young man with the purple Mohican haircut).

The second time around I was simply enormous.  I fainted when I laid down on my back towards the end.  I was constantly exhausted - always looking for somewhere to lie down!  Sam was not really a demanding child, but he wanted to play all the time, and I was his only playmate in the day.  Looks like the cat suffered too. 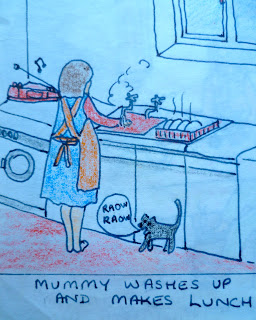 When we moved in to this house in 1981 (horribly cold winter,  no central heating) we got a home improvement grant as there was no kitchen.  We had £200 to pay for it, so to make it stretch, I put the kitchen in myself.  I bought the cheapest and most basic units which were white laminate with aluminium handles along the tops.  We had no room for wall cupboards.  The fridge freezer wobbled because of the old gas pipe which I hadn't been able to saw off properly  (it was cast iron and too tough).  I had terrible trouble with the plumbing because I forgot to allow for bends in the pipe so the taps were in the wrong place.  A rookie error as it turns out!

The kitchen was really a bit tired by 1990, but we had finally got around to putting the lino down so it seemed quite luxurious compared to bare concrete. 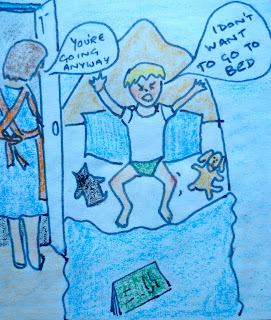 Sam at nearly 4 years old was a bit bolshy about going to bed in the day.  I think I needed the rest more than he did by then, so it was a purely selfish act to make him go!

He still hadn't quite got the courage to get out of bed once he had been put there.  I look back and feel so mean!
Posted by Strawberrysoo at 10:51