The Heart Hospital no 2 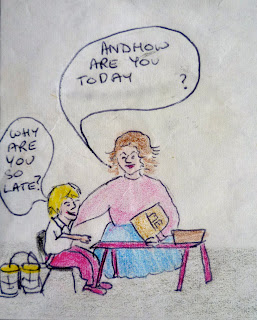 Anne was the wonderful play leader who did interesting things with the children.  She sometimes brought musical instruments or finger paints.  They thought it amazing that they were allowed to get paint on the sheets.  I am not sure if the nurses knew!

Sam spent a lot of time at this little table either watching a video tape or doing drawings or reading a book.  He wasn't very mobile unless we could find the drain trolley.  Even then it was painfully slow getting anywhere.  We would sometimes get to the playroom next door and he would get settled in a chair then have to be carried back after 5 minutes because he was too tired to play. 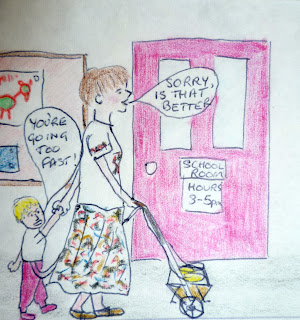 We found the drains trolley!  I think someone had made it in their shed.  It had that home made look about it, and they only had one.  It was wooden, with squeaky wheels - rather like those ones you get on old fashioned wicker shopping trolleys.  I got told off for holding his drain pipes up above his chest, apparently it stops them draining.  Should have realised I suppose.

This time round Sam was too young to use the schoolroom but he liked having a look at the paintings the other children did in the older age wards.

He also liked going to the little toilet - I can't remember why it was little.  I think it may have been child sized,  like those tiny ones we had at infants school.  Ours were only accessible from the outside playground.  Very chilly in the winter of 1963 when I was 6, I can tell you! 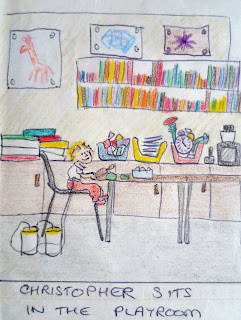 We made it!  Play dough is such  a wonderful thing - I adore the smell and the silky feel of it.  Salt dough that you can make at home is never quite the same.   I had not seen child sized rolling pins before because we used sawn up pieces of broom handle.  Look in anyone's shed and there is always a bit of broken broom handle somewhere!   One of the nicest things they had was a truly gigantic marble run which one day Sam and I managed to get up to 5 feet from the floor.

Keeping Sam (and me) amused while he was so immobile was a real job of work.  We got through dozens of children's picture books - they had a seemingly endless supply. Sambbecame very fond of one called "Morgan the absent minded mallard".  I can't think why it appealed, it doesn't exactly trip off the tongue!  Spending so much time sitting down with adults, Sam was old for his age.  I found myself reading the Narnia stories and various Joan Aiken books to him as well.  He was always keen to know what things meant if he didn't understand something so it took a long while to finish them.  We both learned far more about dinosaurs than is strictly necessary...  He became one of the very few 4 year old boys to know what taxonomy meant.   Well he asked!