Heart hospital no 3 - visitors and food 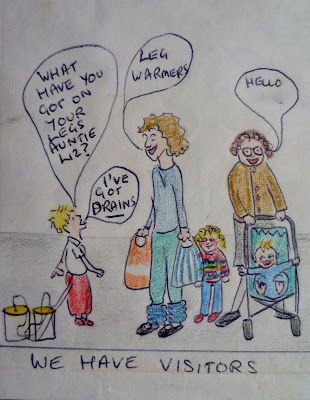 This picture is of Jim's mum and his sister bringing George and Mag to see us. Andrew was a very cheerful baby, Mag was a generally quiet, noticing sort of child who was loved by all her cousins.  Leg warmers were still fashionable at the time - mercifully not so much now!  They always made me think of socks going to sleep.

Because we were in hospital for such a long time, it became a red letter day to have visitors.  In the second week my parents drove baby George to Kent to Jim's mum to have for the next two weeks.  Both  grandparents kept meticulous records of feeds and sleep times, as they had been taught when they had their children in the 50s.

The grandparents came to see us in hospital with George, despite the difficulties of having small children in push chairs,  dodgy knees and long train journeys.  This went against the grain with my mum who wrote in George's diary "Went to see Sam.  Routine haywire - got home, would not settle so took him for a walk."  In the 50s routine was all, for babies, even down to feeding and sleeping at very exact times of the day.

I am a fan of routine myself especially for babies.  It makes life so much easier for everyone which means that as a parent you can plan fun times and outings where everyone will be comfortable.  On the  few occasions when I took the kids out of their routine, I ended up in a situation where the baby was hungry or tired and crying and there was nothing I could do about it!  Most distressing. 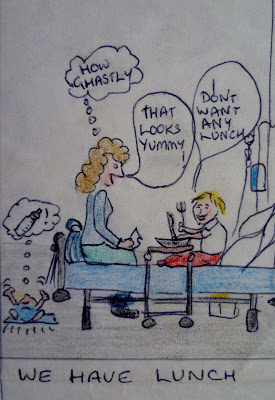 Aah!  Hospital food!  There are issues with the amount of money available for food in hospitals, it is not a lot per patient per day, but I have to say I wouldn't have eaten it!  Sam wouldn't either, and we resorted to having food brought in from home by grandparents. We also used the parents' kitchen to rustle up tasty snacks and meals for him.  He couldn't have any fatty food because of his drain problem, so we had to make very low fat foods, less than 2% which means skimmed milk and no oils or even low fat spreads.  He got painfully thin which didn't help his recovery.  George continued to love milk as you would expect.  He was on solids with the grandparents as he was so large (long, not fat) and would wake for more unless completely stuffed before bed!  He was a very sucky baby so had a dummy for bedtime.  It never came out of his cot so he didn't get used to it in the day. 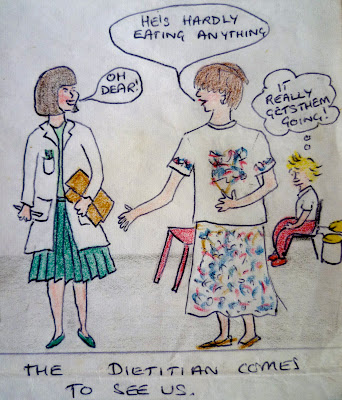 We and the hospital tried to get Sam to eat by hook or by crook and of course he became aware it was a lever!  Jim found this particularly hard to take as he loved to see people enjoying their food, and to give them what they liked to eat.  In the end his only diet became pasta spirals, oranges, skimmed milk rice pudding and home made lean turkey burghers with plenty of tomato sauce.  By the time we came out of hospital Sam had us wrapped round his little finger food wise.  - Oh deary me!

As my mother helpfully pointed out, we had made a rod for our own backs!