A small digression in Salisbury 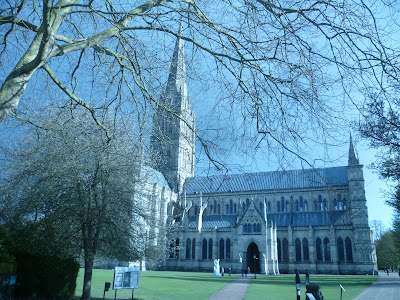 This weekend we had an unexpected trip to Salisbury for fun.  I got home from work on Thursday after a long day and we just booked a guest house for Friday.  How radical!     George (now suddenly 23 years old) volunteered to dog sit.  We didn't tell the dog.

Salisbury is my favourite cathedral close in the UK.  The cathedral is stunningly beautiful and the setting is perfect with smooth lawns and graceful trees.  It is particularly lovely because it was built mostly in one go between 1220 and 1258 so it looks as the designer intended.  It is I think the most elegant cathedral, but then I like the Early English style of architecture.  I took this picture yesterday (Saturday)  and it was pretty cold.  The benefit of the cold was that it was quiet,  so the atmosphere in the cathedral was as serene you could wish for. 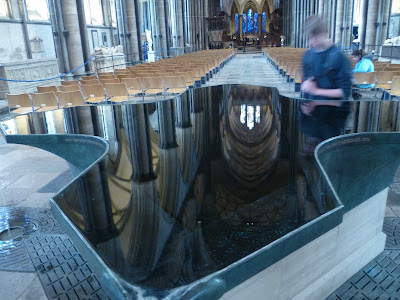 beautifully.  I thought it fitted in amazingly well.  I did wonder if they could do four baptisms at once!

Edward Heath is buried there who was Prime Minister from 1970 to 1974. We went to say hello because Jim regarded him as one of the best, despite being a Conservative - he says nobody's perfect... 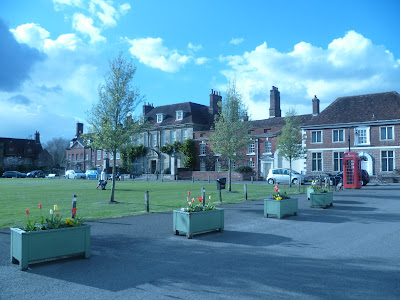 More of the cathedral close with Mompesson House in the centre This is an 18th century house where some of Emma Thompson's Sense and Sensibility was filmed - I think Hugh Laurie was in it at some stage too.

It has a nice little cafe, with tables in the garden in the summer. They were there, but the occasional icy rain storm seemed to put people off sitting outside.  Jim had a great time chatting to the room stewards about volunteering for the National Trust.  He works at Ham House in Richmond as a volunteer when it is open through the summer. He was jealous of their nice warm fires which they can't have at Ham because it is too old and dry! 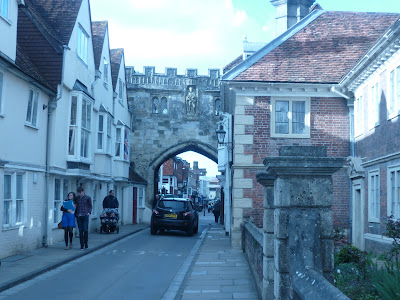 This is the gate from the cathedral close into the High Street.  They close the doors at night to keep someone out or in.  Not sure who.

We spent most of the day looking round the various antique shops in and around Salisbury.  Sadly everything was either far too expensive and gorgeous for us, or right at the other end of the scale and really just a bit broken.  Broken is fine if you are just collecting something to look at and can hide the bent bit by turning it round or something, but no use at all if you want to actually use the thing. 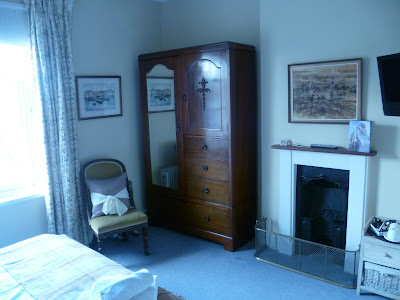 We stayed just outside the close in a lovely Georgian guest house called St Anne's.  A lovely view of red roof tiles and sky, as we were right at the top.  I liked the wardrobe - often there is not enough space to put clothes but this was plenty big enough.  It was just b and b which suited us fine as Salisbury is stuffed with good restaurants. The breakfast was good too.   We went to the Lazy Cow on the first night for a chunk of protein.  Lovely beef (and mohitos and wine, oh, and a beer in the Ox beforehand....)

The second night we had dinner in the Thai Orchid, which was just as good.  After the excesses of the night before,  jasmine tea was very welcome!

Home again now and back to the daily round of kids stuff that happens in families,  and work, and walking the dog etc etc.

But wait!  I left my garden looking reasonably spruce with short - ish grass and a weed free veg patch.  I come back after only TWO DAYS and I swear someone has transplanted every variety of dandelion known to man into my lawn.  The grass is now at least 5 inches long.  It looks pretty but I think I need to get a cow...