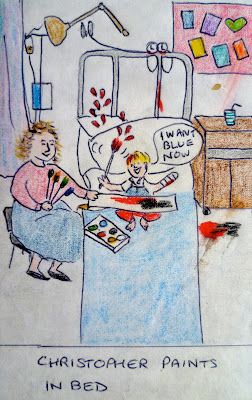 This is Chris having his treat with Anne the playleader.  She had endless patience with sick children. After getting anything done or having a hard time the kids were given a  treat of some sort.  Chris was allowed to paint in bed which he was thrilled by.  Being a ridiculously sentimental person I have most of his little drawings and paintings still, although they are now stored in the loft.  The red on his bandage and the floor is not blood, it is paint.

Our friends Val and Andrew came up on the train to see us.  Val had just had  a foot operation so she sat on Chris's bed with her foot in plaster and they commiserated with eachother.  We had a lovely day racing in the lifts (we were caught by a bunch of rarefied surgeons!) and going to lunch in a pub down the road.  It was a Sunday and there was a stunningly good roast dinner.  It tasted fantastic after weeks of hospital canteen food interspersed with microwaved supermarket ready meals.  The nurses looked after Chris for a while and we went out gadding.  Do you know, I didn't feel guilty at all!  Val and Andrew went home jolly to the last.  I know Val had terribly sore feet and that they both found the experience of seeing Chris so ill really hard, but they came anyway.  It was one of the highlights of our stay in hospital and I remember it to this day. To visit and cheer the sick is something which is regarded as good, but it is surprising how many people either don't come, or who come with a long face. We were lucky in that all our visitors were lovely and cheerful for us, however they may have felt afterwards.  Also, they all came to see us however inconvenient or far away they found it.  We were very grateful to all of them.  (You know who you are!) 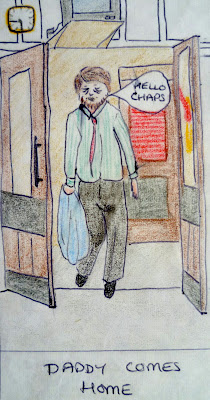 It may seem a little odd to call a hospital ward "home" but we tried to make it home like for Chris, as much as possible.  Paul went off to work every morning and came back every evening, leaving Chris and I on the ward.  Some days it was hard for him to go, if Chris was in pain or I was feeling the strain, but he had used up his time off when we were in intensive care so he had to go in.  In some ways I think it helped, just that little bit of normality.  At least it gave a rhythm to the days and weeks.  He used to get a few groceries on the way home.  He was really wonderful and supportive.  A total brick, in fact.

It is sad but true that many families faced with serious illness in a child, find it such a strain that they do not stay together.  Paul and I found we got closer,  I think we were both so focused on being strong for Chris and getting him well, that we completely forgot to have any marital strife. Well, apart from the usual "no, it's your turn to make the tea this morning" type of thing. 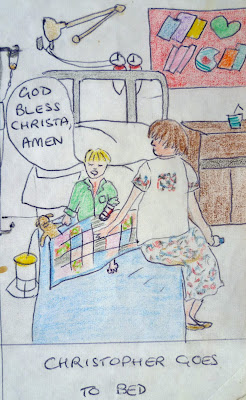 What can I say?  It seems mawkish to have him say his prayers in hospital, but it was part of what we did at home, so we carried on doing it in hospital.  I may have felt self conscious, but I don't think Chris did, so that was OK.  I really felt awkward singing his songs as well!  It was his routine to go to bed to have them, so I couldn't really stop.  I wonder how many people have stage fright sitting on a hospital bed?

We are down to the last drain in this picture.  A few days later it stopped and was taken out.  Within a week we were sent home, which was scary in itself.  I know Chris was frightened to be at home, especially as he was so weak and frail at first.   I had to take out his last stitches myself, which was really difficult.  He wouldn't let me near him, so in the end I sneaked up and did it while he was asleep.  I must have had better night vision in those days!

He picked up remarkably quickly though. It was lovely to see him looking pink instead of air force blue. He was soon up and about  and playing more energetically than he ever had before. He said to me "Mummy, I used to wonder how people could do so many things before, but now I can too."
Posted by Strawberrysoo at 15:33