Housework is like painting the Forth bridge? Is that bad?

I actually quite like housework.  No, really.  I don't mind the Forth bridge aspect of it.  It gives it a kind of rhythm, like the seasons.  I am not too keen on washing up and I don't much like ironing, but generally, cleaning is something I find restful. I also like turning out cupboards.

As a child Mum used to let me mooch through a drawer of odds and ends, or tidy the sewing box.  I have a vague memory of doing this after I had had measles or mumps or some other ghastly disease.  (Thank goodness now for MMR vaccinations!)  We had a big old wing-backed armchair with wooden arms just the right size for a tray to be rested across.  Propped up with pillows and swathed in an eiderdown, I would be brought something interesting to do that could be done on a tin tray.  I seem to remember "Listen with Mother" being on the radio at the same time, but who knows, what with the mists of time and all.  Anyway, I digress, the point is, I like bringing order out of chaos, and making things clean.

When young, I was never a particularly good housewife, the house was very untidy and often a bit dirty round the edges.  I say that was mainly lack of time, not inclination!  Now that I am grown up enough, and working again, I sometimes have a cleaner.  I don't really like it because the cleaner doesn't do it the way I would, so I feel niggled and wish it were done properly.  I have tried to work out why I mind, and whether it would be OK if I found a cleaner who did it exactly to my standards.  I have finally concluded that I am so picky because I would much rather do it myself.  So there.  I am out! 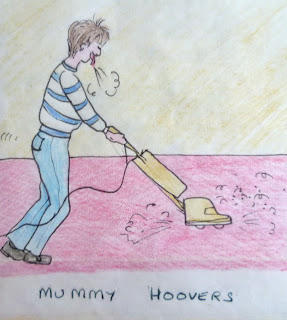 This is a picture of an almost totally ineffective hoover.  As all can see, the dust is emerging in clouds from both ends of the machine.  The only good thing about it, is that Sam had an identical toy model, which he thought really worked.  Sadly I got rid of it before he grew into the real thing.

I think I put these pictures in to camoflage the large amount of time I spent playing about with the children or surreptitiously reading books of no particular use.   I gloss over the fact that I clearly spent a fair bit of my time drawing cartoons... I enjoyed being at home so much I felt guilty!  There are not many jobs where you can play with Lego all afternoon without being fired. 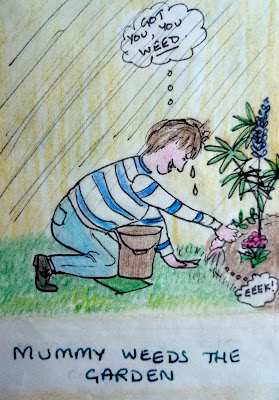 Gardening is something I love.  You can tell because I will even garden in the pouring rain - I know this really happened because I remember that lupin.  Jim is very fond of lupins so despite the ravages of slugs and lupin aphids, I try to grow some every year.  It wasn't quite that colour but my purple pencil broke, and I had the blue sharp for the jumper stripes.

I am better about weeds now, apart from dandelions.  Dandelions and giant japanese knotweed.  Someone once told me we should enjoy dandelions because they would be really valuable if they were rare.  But they are not, so we don't have to.

Giant japanese knotweed can tunnel under 6 lanes of motorway.  No one told the knotweed about motorways, so instead it took up residence under my shed, and tried to tunnel under everything in the garden.  Every spring it would surge out of the ground, growing at a frightful rate.  I swear you could see it getting bigger.  I would hack at it daily, but all that would really slow it down was glyphosate poured into the cut stems every day.
I feel that roadbuilders have missed a trick somehow.