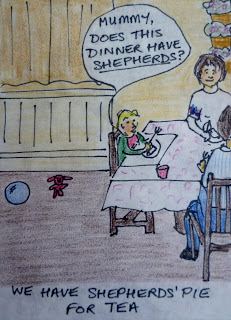 Here we are having shepherd's pie for tea.  Like all small children, Sam had a pretty literal turn of mind!  Even in times of famine, shepherds were off the menu.  I told Sam this but he wasn't convinced.  George still prefers not to eat minced meat, even after three years starving slightly at university. He believes it is best only to eat meat which is a slab carved from a cow or a sheep.  I reckon it is because he thinks it is butch to be a born again carnivore!

The wall paper and curtains matched in this room.  they were both a Sanderson pattern of little brown and gold flowers and leaves.  Very 1970s.  Sadly we had a few rolls of the paper left over from our first flat, and the curtains fitted the window in the new house.  We thought it would be stylish and inexpensive to have a feature wall or two with the wallpaper then decorate the rest with painted woodchip paper.  It might have looked reasonable if we hadn't inherited a foul brown carpet from the elderly previous owner.  I couldn't bring myself to draw the 1950s style yellow circles and spots, or the bald patches, so it looks quite refined.  Allow your mind to fill every flat surface in the picture with flowers, spots, circles and stripes in clashing shades and you will get the idea.  Actually, don't. 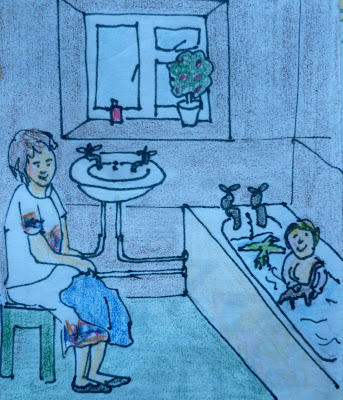 Sam loved his dinosaurs so much, even though they weren't at all cuddly.  I used to remove them from his bed after he dropped off, to avoid questions from school about why his face had pterodactyl imprints on it!  They often sat on the table watching him eat so a bath was useful from time to time.  Drying between the toes of a tyrannosaurus can be tricky.  You have been warned.

I have just noticed that I have been wearing the same outfit for several months in this blog.  I must apologise for this, but it was my favourite as it had an elastic waist as well as being easy to wash.  I carried on wearing it until it went in holes.  Then I cut out the nice bits and used them for patchwork.  Waste not want not.  (My grandmother again).

I seem to have drawn a miniature apple tree on the window sill.  It was a jade plant in fact so I don't know what I was up to.  Probably wishful thinking, as we had a pocket handkerchief sized garden.

I painted the bathroom stool that fetching shade when I was off sick from work for a week, before kids,  but felt well.    I was bored to tears and did loads of those little jobs which you can live without doing, such as painting the bathroom stool British Racing Green (really).

The reason I was at home was that I had little red spots all over and the doctor said it was German Measles.  He told me that I was highly contagious and must not leave the house until the spots had gone.  I didn't, and the spots stuck around as well.  After a week I phoned the doctor.  After careful thought he revised his diagnosis  to "pityriasis rosea"  which apparently is little red spots in Latin...  I went back to work where I was unpopular for being away for a week, being bouncy with health and having contagious looking spots.

I felt misjudged on so many levels!