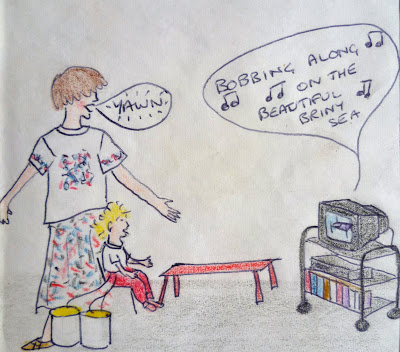 Here we are watching Bedknobs and Broomsticks yet again.  I  knew the whole film by heart!  I think Sam liked the familiarity and safety of the repetition as he used to watch the same things over and over again.  Mind you, there were not many video tapes (anyone still have those?) to choose from.  The little shelf under the TV was the hospital young children's ward library, so we brought our own ones in. We couldn't leave them at the hospital for long, because Sam's bedside locker wasn't very secure storage as from time to time he would get moved to a different bed, or as on one memorable occasion, a side ward.  Bliss!

One of the things people don't realise is the noise and lack of privacy in a hospital ward.  I remember being told one day that we couldn't go home (we had been expecting to be discharged) and that Sam would need a new drain.    After I had comforted him and got him settled with a book, I found what I thought was a quiet place for a little cry behind the fire extinguishers on the back stairs.  Unfortunately the consultant decided that his troupe of students needed more exercise and took them up the stairs, so twenty trainee doctors filed past!  How embarrassing!

Anyway,  we loved the side ward.  Sam could sleep properly without the other children keeping him awake crying, there were no horrible sights and sounds to focus his mind on what might happen to him next.  He just had a nice quiet day with Mummy.  We didn't even miss the TV.  Sadly it only lasted a few days and then we were moved back to the main ward.  I tried to explain that we preferred it but there seemed to be a deeply held belief among the staff that we missed the other children and the company.

We really didn't.  We had been in hospital away from privacy for six weeks by then.  Other children came in and had operations, got better, hopefully and left.  Sam was a long term patient because of his particular condition.  While we were in the side ward, Sam trod on his last drain and pulled it out.   Luckily the nurse was there and put her hand over the hole so he was OK. 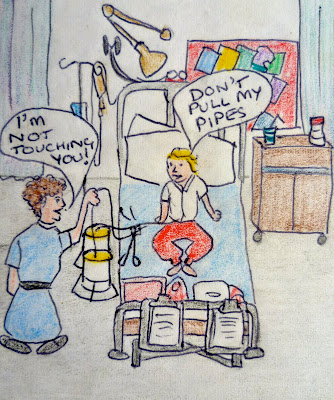 When the doctor decided to leave him without drains for a few days we were told we could take him on an outing!  Until you have been indoors for 6 weeks or so, you have no idea how exciting it can be taking your first breath of free air! It was mid November with Christmas just getting into its stride in the shops. We took Sam out to Peter Jones - a huge glittering department store on the King's Road  in Chelsea and had coffee and cake.  He was in ecstasies over the people, the traffic, the Christmassy lights, everything.  We came back to the hospital and gave him a bath - his first for 6 weeks.  The nurses were very inventive with waterproof tape over his drain wounds. I think they were quite excited too. It was like we got him back that day, our own child, not the hospital's.  He could wear his ordinary clothes with no tubes trailing out.

I have never stopped feeling grateful for the wonderful nursing and medical care Sam had.   The people who worked there cared passionately about the children. Despite the fact that the building was old and rambling, (they have a lovely new one now) it was one of the best heart hospitals in the country at the time, and we were lucky to live so close.  I don't resent a penny of the tax I have paid!  Whatever the government may think they spent it on, as far as I am concerned it all went on Sam.
Posted by Strawberrysoo at 05:26