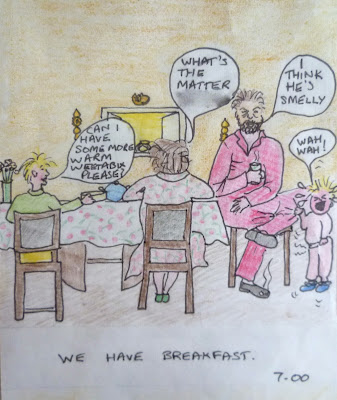 At last after many weeks in hospital we were home having normal family life, whatever that is!   George was home with us again, Sam was back and eating, but only a limited diet, as he had learned that he could hold us to ransom.  Oops.  I think we were still in shock after our hospital stay - we tried to carry on as if nothing had happened but we were often not really firing on all cylinders!  We didn't really ignore George like that all the time - he was not his old sunny self.  He was weepy and clingy.  He needed much more attention than before we were in hospital.  Hardly surprising after being deserted by me so suddenly.

Sam was not his old sunny self either.  He was afraid of all types of physical activity.  He was very stiff and unco-ordinated which we thought was due to the operation.  As it turned out, he was also severely dyspraxic.

No help was available for dyspraxia,  we tried to improve his physical skills ourselves.  Someone suggested jumping exercises, so I coaxed him on to the first stair in our house and encouraged him to jump off.  I was waiting to catch him, but he was still terrified.  Dyspraxics often don't have the reflex actions which you would expect.  Sam didn't know you had to bend knees on landing,  so he landed straight legged jarring his whole body painfully and hurting his back.  I felt such a bad mum for betraying his trust.  After that experience we stuck to swimming and walking!

Walking was something we did a lot.  I still feel strongly that if possible, cars should be avoided for journeys that can be walked.  Also it is a lot quicker to get the kids into the push chair, then deliver them to the door without having to decant in and out of cars.  There was no parking near the school and often none near our house either  (it was built in 1902, before motor cars were about much).

I used to enjoy the walk to school which gave us the opportunity to have a story on the way there.  On the way home I just used to listen to all the things that Sam had to say about school.  Such happy days!  It was very pleasant in the summer because we had a little lane between the hospital and the park which was pretty and countrified.

When we got home from taking Sam to school George used to go to bed for a while.    He wasn't like Sam so I didn't get long.  He was bouncy and full of beans most of the time.  I was not at all used to it!

Peepo was a lovely book - even I liked reading it.  It is one of the ones we have kept, despite its being held together with ribbons and things.  It's a bit chewed but it holds happy memories.

I had forgotten we used to keep the baby bath under the cot upstairs.  There was nowhere to keep it in the bathroom, so I used to lug it up and down stairs for his bath.  At least it was empty at the time!  As it was such a long way to the kitchen from the nursery I had one of the first baby alarms which was quite high tech and cutting edge at the time.  I was very pleased with it.  I had to remember to turn it off until I had read the story.  No one liked listening to Peepo three times in a row every night, except George.

And so to bed.
Posted by Strawberrysoo at 11:48