Heart hospital no 5 Surgeons and friends

We were nearing the end of the stay in hospital.  Although Sam had a drain again, it was only a few days until we would be told by the surgeons that he could have it removed and go home. 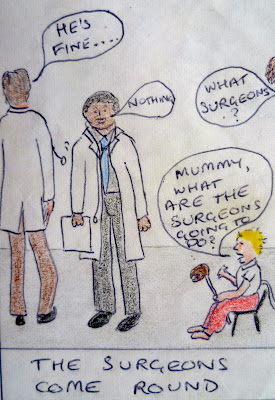 Surgeons are rarefied beings.   They drift about in a kind of cloud of supreme confidence, which is just what you want to see if they are going to cut you up.  They don't say much, and they rarely do bedside manner.  The surgeons who operated on Sam were perfect examples, except the younger one (a trainee I think) saying "nothing"  Strictly speaking, he should have been facing the other way, or have been silent.  I dare say he will have learned by now.  I have the greatest admiration for them so please don't take this seriously!

Sam had a snappy dinosaur, which he used rather like a hobby horse, to bite people if they displeased him in any way.  He also used it to pretend to eat the nurse doing his observations, but that was because he liked her, not because she was naughty.  It looks a bit like a parrot there but it was supposed to be a T Rex. 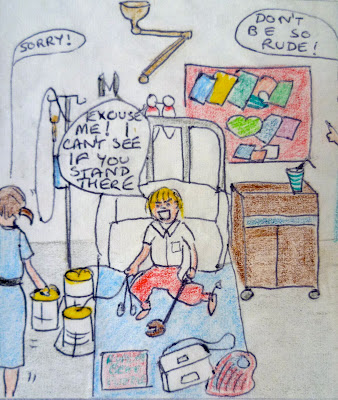 The nurses were very long suffering with Sam and gave him loads of leeway.  I didn't.   I was my usual crabby self.  I did a lot of correcting and not very much praising.  This is a trap I fell into with the children through stress of Sam's illness and worry of what others would think.  I am sure that it is not unusual but it caught me when I was least able to think.  Sam in the picture is being polite although he is shouting.   I only noticed the shouting.  It took a very good and loyal friend to show me where I was going wrong.  By that time my poor kids were often being shouted at and I was always cross.

Months after we came out of hospital, we were visiting my good friend Val.  She saw what was happening.  She suggested I praise good behaviour and have a generally positive atmosphere.   She is a trained nanny of the old school (in a good way), and a very wise and kind person. I can remember thinking, there is nothing I can praise, they are always naughty!  I racked my brains...    "You put that sock on nicely"  was the first one.  I felt silly saying such things but I persevered, and it was a revelation.  By the end of the day we had not had a single shout.  It took months to repair the damage completely.   I had to say how nicely he put his socks on for a long while, but it was a great relief to say something pleasant for a change!  Of course we still had bad days but in general we didn't really look back.