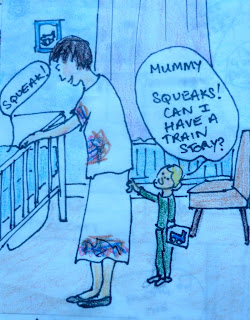 George had a loud voice.  He learned to squeak and there was no stopping him.  He would squeak happily for his feed in the night and very early in the morning.  At first Sam was charmed, but a few broken nights soon put paid to that.  After a while his squeaks varied more and more, until one day in the car when he was still under 7 months, Sam and I both recognised "Hey Diddle Diddle" being sung almost in tune but without consonants.  "The cow jumped over the moon" sounded like a lost soul in torment - loud wails of  "Eh ow oh! ooo"  So cute.

George now sings bass in the local choral society.  He started at 11 and sang treble, which gives him grief every time he sings something we have done before.   He keeps singing the soprano line.  Sounds terrible. (Sorry George, not really).

Sam had dozens of Thomas the Tank engine books which are calm and understated as far as stories go.  The names they used were a bit unfortunate.  "Mummy is that the FAT CONTROLLER?"  he would yell, pointing at some poor, benighted, corpulent gentleman.

Ant and Bee was a story book which my mother read to me as a child.  I thought it was wonderful at 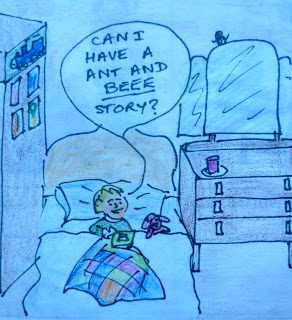 the time.  I was thrilled with the idea of "kind dog"  and lost things being saved and put into boxes.  I bought a book for Sam.

It had HUNDREDS of pages full of endless repetition about  lost hats.  I dreaded meeting a dog or a bee in case it reminded Sam of the books.  Even ants weren't safe!  I used to hide them under the sofa cushions (books, not ants), but he had a stash under his bed somewhere  so I couldn't get away with it.  I worked like a Trojan on his reading so that he could read them to George and I wouldn't have to.  I was ecstatic when I heard him say to George one day "shall I read you Ant and Bee?"

I figured I must have been a good parent when I found Sam sitting on the floor reciting word perfect from memory, with George looking at the pictures.

We all worry about that don't we?  Being a good parent?  I spent a lot of time trying hard and getting it wrong (as I saw it).  Did I help too much with their school work?  Was I too negative? Did I praise too much? Were my behaviour standards too low?  Was I too strict?  Not strict enough?  It is a minefield we all have to walk through with no proper map.  I found it especially difficult as I had a child with special needs.  I wanted to keep him safe and happy.  It is very easy to be a pushover for kids who are ill, but it doesn't do them any favours.  Just like everyone else, they have to live in the world and it takes no prisoners, makes no allowances.

"They have to grow up"  people would say.  "NO!" I would think "they are so lovely now, don't change them!"  But the inevitable happens, and suddenly they have a big deep voice and a beard and help you carry stuff.  After all that angst, my kids also say "I had a great childhood" or "I love you anyway" (if they are trying to needle me) so I can still sleep at night without too many regrets.