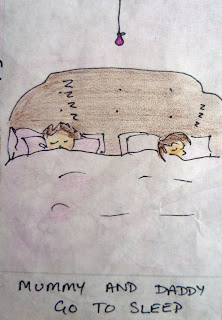 There's not a lot to say about this one, so I won't say much.  Even parents have to sleep, so maybe this was supposed to prove it to Sam.  Note how Jim's snores are louder than mine.

Time for a bit of random tootling as we call it.  I have just finished the washing up after a dinner for thirteen (plus the dog in case you are superstitious).  We had a complicated group of people including friends, and teenage children who are back from university for the Easter holidays.

The dog was beside himself with joy at so much company particularly because it has been so cold recently and he hasn't had so many walks as usual.  It is still snowing today and it's April!  In London!  Brrrr!

Jim cooked.  It was supposed to be "leftovers" but when we looked in the freezer we realised that there was only one dish we could use.  Twenty boxes of redcurrants (even though organic home grown ones) wouldn't really be ideal. Jim cooked a lamb curry with potato, chili con carne, spaghetti bolognese and chicken and chorizo.  (I may have mentioned before that he loves to feed people).   We also had gypsy tart* which was a bit of a trial.  I  looked at it beautiful in the oven, golden and risen.  I thought  "two more minutes".  Two minutes later it had overflowed, separated and coated the oven in goo.  A quick trip down the High Street and two more successful tarts made with the leftover (luckily) mixture. Phew! Just in case I made a Oliver's Chocolate Surprise* pudding which is known to be foolproof - even if it goes wrong it tastes good.  We also had a fruit jelly, because I love the way they wobble!  It is diet day tomorrow so the kids will have to eat up what is left without Jim and I.  This is the end of the random tootling for the day. 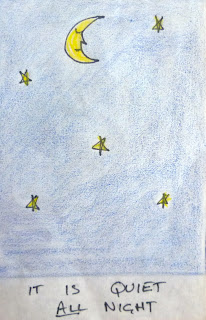 This second picture was definitely a big hint for George, who was unfortunately too young to understand it.

I don't know about it being quiet all night.  This next bit of tootling is slightly less random so it doesn't count.

In October 1987,  the year after Sam was born, I slept through the great storm, sometimes known as "the hurricane" which devastated the south of England. Sheds, trees, roof tiles all flying about outside in 115mph winds,  it was the worst storm since 1703.  We lost 15 million trees, thousands of people had no power, wreckage brought roads and rail to a halt,  but the whole family slept like babies!  I guess that means that whether it's quiet all night or not makes little difference in our house.

*  Recipes because they are both yummy.

Everyone who was at school in the UK in the 70s knows this because you had it for pudding once a week if you were a "school dinner" or lusted after it if you were a "packed lunch". I always forget to put the evaporated milk in the fridge the night before so 1 hour in the freezer works for me.

Chill the evaporated milk  in the freezer for an hour or so first.


Make the pastry case.  (or buy one if you are lazy or in a hurry like me).

This is really lovely and goes very well with hot chocolate custard.  I have never known it go wrong, even when small children "help".  It is a recipe I inherited from my granny so it is only in imperial.  If you want to, you can make the sponge and the sauce separately and put the sauce on just before you cook it.  I did that last night and put it in the oven when we sat down for the first course.

Serve with hot chocolate custard (make a blancmange mix and serve it as custard), or pouring cream.