The Heart hospital no1 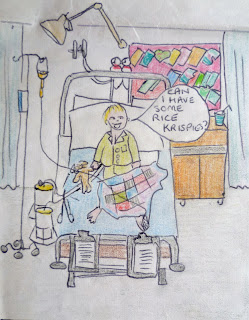 Since Sam was 6 months old we had known that he had a serious heart problem.  One of his lungs did not grow properly either and he had an operation at 18 months to improve the blood flow.  We then had to wait until his lung function was good enough for his heart surgery to work.  By October 1990 the long awaited heart operation was over and, thank goodness, all went smoothly.  We met the surgeon, Mr L, in the lift by chance the day after and asked him if it had gone well.  "Of course it did"  he barked  "I did it".  House has nothing on Mr L!  (Apart from all the reprehensible things of course).

Unfortunately Sam's recovery took over 8 weeks in hospital with drains (he really found the drains painful).  The constant loss of fluid meant he had to have a drip the whole time as well and they kept wearing out.  All in all it was a bit horrible and difficult for everyone.

But children are very resilient, or so it seems.  Sam quickly got into a new routine which involved being cute and charming to anyone he saw.  He hoped this would get him extra TV time, and possibly let him off medicine/injections.  It is so difficult to explain to a four year old that they have no choice about it.  I have an image of him in my mind, standing on the nursing sister's desk pretending to be a doctor on the telephone.  "Is it an emergency?" he said  "OK,  I will be there in about 4 hours".  The nurses thought he was adorable (he was) but the doctors were a teeny bit put out.

I felt that the best thing to do was to be firm and insist on instant obedience in the way of taking medicines.  Other children in the ward would still be screaming and trying to avoid it long after Sam had taken his medicine and gone off to play. I am sure it helped him to avoid many unhappy hours in his life.  He had to continue taking bad tasting stuff throughout his early years, but he never complained or made a fuss.  It became the norm.  I still felt like a heel every time he had to do it.  Just recently he told me it tasted appalling.

I had left little baby George (just 6 months old) with my parents and Jim's mum alternately.  Jim and I had a room in the beastly beige parents' quarters on the other side of the hospital. It used to be the nurses' quarters.   It was an old Victorian building with labyrinthine corridors.  In the night if we got a call, someone in the parent's quarters would have to hear the phone ringing in the corridor and answer it, then go and knock on the right door and pass on the message.  When we were called once or twice (terrifying) we had to use the service tunnel under the road as the exits were closed at night.  A few years later the brand new Sydney wing was built and conditions were much improved.  Even in the old wing it was a wonderful hospital and saved his life.

We both stayed because we thought George was too young to miss us much (wrong), and Sam needed us (right).   Jim worked in Victoria in London so he could get to work very quickly on the tube from South Kensington where the hospital was.  Some nights we went home to visit George and do the washing.  We never left until Sam was asleep.  By then George was usually asleep too. 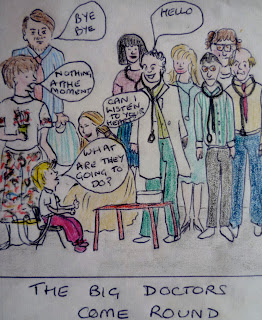 In these early days I hadn't realised the order you put speech bubbles in a cartoon is important.  I do apologise, and I hope it is understandable!

Every so often the "big doctors" did their rounds.  This was just the consultant and his entourage but Sam had a good eye for hierarchies and worked out that they were more important than the "little doctors", who did day to day stuff.  He was always worried they would do something to him, although  they usually didn't.  As it was a children's ward they were quite kind to him, but it was the nurses who made our days bearable.  Most children had parents with them a lot of the time, but some didn't, which was hard.

At the time we thought we were taking it all in our stride, but it turned out that we weren't, even though that took us some years to discover.  A stiff upper lip is very overrated.

I am still wearing my favourite outfit!  I did have others, honestly!

I have thought about leaving this set of cartoons out because it is not really "normal" life.  Then I wonder what is "normal" anyway?  I made mistakes during the hospital stays that I think other people might make, so I hope it will be helpful to someone to see what not to do!  Sam's heart operation was at the leading edge at the time so things have changed a lot. The treatments are much more successful and shorter now.  To avoid any unpleasant stress for the reader, Sam is now a reasonably healthy 26 year old! (With a big deep voice, a beard and a massive personality).

I would love to hear from other parents, is this useful and/or interesting?