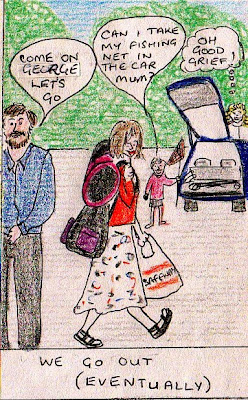 I don't know about anyone else, but it used to take us ages to get going.  Someone always needed a wee at the last minute when you had just locked up and put their seat belt on properly, or had forgotten some vital piece of equipment George had a stick which had to go everywhere with him - clearly a vital accessory to every outing.  It was invariably unaccountably lost in the garden and like Ratty in Wind in the Willows, he "won't have any other".  In the end we painted it bright red on one of our art days.  He chose the colour and painted it on himself.  At least it was easier to find in the woods.

My sister, being single, had no idea why we took so long and seemed so hopeless and indecisive.  She was very brave about it and only moaned a tiny bit in the privacy of her own bedroom.  Despite her verbal forbearance, I could still hear her thinking!

I remember Sam being a liability with that fishing net.  He only wanted it with him in the car so he could poke George with it to ease the tedium of the journey.  I put it firmly in the boot - I knew what he was like!


Boxy jackets were in that year I see.  I remember the boys both had little sailor style jackets and blue and white stripey t shirts.  So cute.

Looking at all the moans and groans which I have drawn, despite the fact that we are on holiday, I perhaps ought to explain that we were still in a state of shock after Sam's hospital stay, and although we didn't realise it at the time we were quite low and stressy most of the time.  So was Sam.  He was so keen to pack every experience in and miss nothing.  He was terribly worried that we would be late, or left behind, or miss out in some way.  I suppose now you would call it post traumatic stress, but we didn't notice and just thought we were normal.  We really weren't!

It certainly was a very wet holiday.  Everywhere we went was muddy and as George was still a little unreliable in the toilet department.  We constantly had our eyes peeled for the next facility!

George was totally intrepid in those days.  He still thought he could do anything and would try every activity with total confidence and abandon.  Such a joyful child!

This was the best that we could find in the way of family entertainment in wet weather at the time. It was all outdoors but at least  you could keep your clothes on and get a cup of tea.

George had no notion of steering, but he could sit on the bike and watch people whizzing past and that was enough for him to be ecstatic and want to do it again.


My sister was footloose and fancy free.  Anything in trousers - honestly!

Sam was always keen on the water.  He also had a good sense of things that would hurt if he fell off.  He didn't fall well.  They wouldn't let George on the boats because he was too young. Probably just as well, he wasn't able to swim at that age, and he definitely would have fallen in. Just saying.

The best bit of the visit was the actual mine, in my opinion, but tastes differ and the children preferred the rather insipid fairground style amusements to trekking along in the dark underground.  The mine is still open and is now a part of the Cornish mining world heritage site.  It is also much more visitor friendly.  The horrible amusements have been replaced by interesting children's activities which certainly seemed popular last time I was there.