Tea time and the 3 Amigos 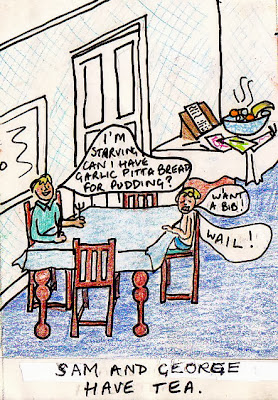 Here are Sam and George having tea.  George was a messy eater and hated the thought of becoming sticky.  I seem to remember thinking that I could wipe skin or put him in the bath more easily than washing a bib!  I also seem to remember that we got him a rather natty bucket shaped bib which was made of plastic and could be washed up like a plate.

Sam had strange tastes in food.  Garlic pitta bread?  For pudding? I suspect Jim was cooking that evening!  After all, he was home early.

By the way that is a plastic tablecloth.  As my mum would say, probably invented by a woman...

We have redecorated the dining room and gone all blue and white.  I still like blue and white all these years later. The carpet is now in the guest room (of a different house to that one) where Sam now lives as he is back from university and has not found a good job yet. Teenagers are a bit like boomerangs.  You think you have got rid of them but they keep coming back. 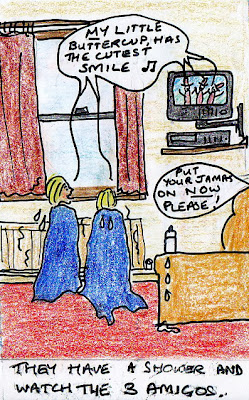 When the children first saw the Three Amigos it was an instant hit.  They still laugh at the jokes.  We were surprised to find that my friend's family also loved it as children.  Walking home from work together recently my friend and I suddenly found ourselves bursting into song at the same moment.  The song?  You guessed it -  "My little buttercup". I was even more surprised to find that we were in the same key!

The boys could procrastinate for England.  They would do anything rather than what they had been asked to do.  I suppose most things are more fun than putting on your pyjamas.  George was still addicted to "milk-in-a-bottle-and-warm-please"at this stage.  He was about 3 years old in this cartoon. His bones needed food.  He certainly has a fine crop now.

We had lovely new sofas made (we thought) of leather.  They were in fact not leather, but some awful product called rohide which did not take kindly the counsel of the years.  By the time we moved a few years later, they had become torn and rough textured.  I was so disappointed.

I have since found that no sofa takes our life kindly.

Sam was always a bit lippy.  This was a usual rant.

He had a great thirst for getting every possible activity done, maybe because he had experienced not having enough energy to do things when he was younger. He so hated to wait, that we used to hide the fact that we were going on holiday until we were about to leave.  His face when we woke him in the middle of the night to go to the airport was a picture.  It saved endless questions for weeks in advance - "how many more sleeps until we go?"

George went to bed like a lamb having tired himself out like a puppy on a mission. (Oh dear! Too many similes!) He once saw an episode of Sooty and Sweep about safety.  In it Sweep the dog, who could only squeak, got his ear caught in a door through "running around and being silly".  George was horrified and took it greatly to heart.  He was closely interested in the bandage on Sweep's ear and would react very positively if we told him he was running around, or indeed, being silly.  Sadly he was always getting some part or another caught in doors.  Still does.

So by one stair at a time, up to the top of the house; where they went to bed, and so subsided, to quote Dickens.