1993 A Cornish tale - sunburn and showers 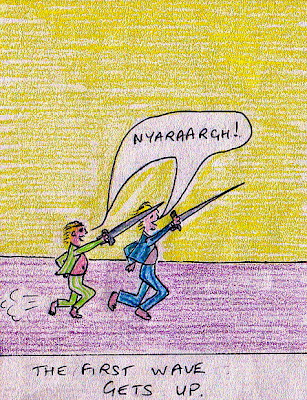 In 1993 we decided that Cornwall would be a great place to return to for our holidays.  I spent two weeks there almost every year from the age of two until I left home at 18, and quite a few times after that with Jim before we had children.  My sister Carol came with us for a week.  Our shared experience as children meant we both loved sea bathing, especially on the north coast where the surf can be amazing and the cold water is - shall we say - 'invigorating'.  Jim was not a swimmer then, and is still not a swimmer, despite my best efforts.

The first problem was that the house was dark and damp and Sam was afraid of the bedroom.  Children take against rooms in my experience.  There's no fathoming it.  I was apparently inclined to scream (as a baby) whenever I was taken into the front room of my parents' first flat.  When they changed the curtains I stopped screaming.  Mum was convinced that the black cartwheels on a red background looked like spiders, but why would a babe in arms be afraid of spiders?  As I said, there's no fathoming it, although they were horrible curtains.

The second problem was that it rained.  Constantly. 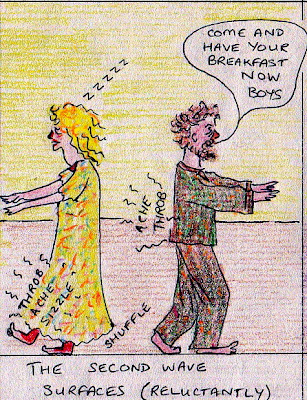 The boys were terribly excited.  Especially Sam, who had been too compromised by his health to really take part in any kind of physical holiday much before.  George was always terribly excited so you couldn't really see much difference.

My sister is not a morning person, but as we all know, children are.  She bore it bravely.

Her legs are that interesting shade (no exaggeration in the picture) because she determinedly sunbathed even though she was and is a true blonde with very fair un-tannable skin. Sunburn arose, even though it rained, because it was fitfully sunny and windy the first day.  You can get a really nasty sunburn on a Cornish beach in July even in cloudy weather.  Not sure why. Every year she would lie in a state of undress on the windy beach trying to tan, and every year she "overdid it on the first day" and all the other days, if memory serves.

In those far off times, a tan was the thing, and pale skin regarded as sickly and unhealthy.  Mrs James whose boarding house we stayed in for many years, used to look in horror at my naturally rather pasty father as he arrived after a long and stressful drive.  "Well midears" she would say conspiratorially, "us'll soon 'ave 'n lookin better". (Apologies to any Cornish people if I have remembered this incorrectly). She nodded happily as soon as his cheeks became suitably weathered. Tanning lotions were merely oils to fry in.  SPF was not involved. 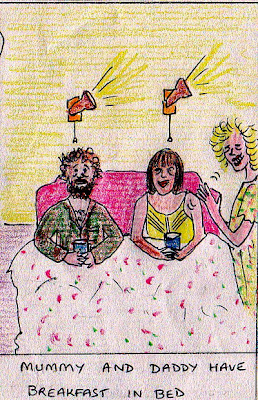 My poor mum who blistered in the sun, being if possible even blonder, used to sit on the beach sulking under towels and a giant sombrero wearing full length trousers, shirt and socks.  Even then she got a burned nose from the reflection from the sand.  As children we regularly got quite painful burns from the sun.  I am still waiting to see if I get skin cancer!  I was so much more careful with my kids, big swimsuits, sunblock etc, but my sister was incorrigible.

Jim and I insisted on a cup of tea in bed while the boys rushed around playing "ogres and controls" or "brave knights"  which they were deeply into at the time (hence the swords).

The house was a bungalow so there was nothing for George to fall from, except the bunk bed, so he did that.  Fortunately no harm done.  We needed the bedroom lights on even though it was high summer - light at 4am and properly dark only after 10pm.  The house was surrounded by large trees and dripping wet leaves were the main view  a few feet from any window.

Ah! The joys of an English holiday!