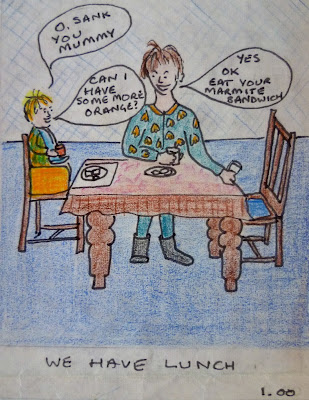 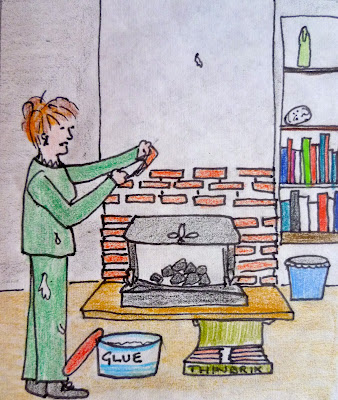 When the kids were little I earned money by any number of jobs that could be slotted in while they were at nursery or school.  I had two and a half hours so I went and worked for my sister who had a whizzy and well paid job which took all her time.  I was a dab hand at decorating (you wouldn't think so to look at the spacing on those bricks!) so I carried on with her lounge.  I seem to remember being very sticky afterwards.

I also cleaned houses,  and took in ironing for a business man.  He was not a good client.  He wore the best quality heavy linen/cotton shirts, up to 20 a week. Sadly he tumble dried them to such an extent that I had a lot of trouble opening them out from their stiffly crumpled state ready to iron.  In the end I used to run them through the washing machine again and iron them damp.  At 50p or 78 US cents a shirt, he wasn't grateful enough, so I was secretly rather glad when he told me that he couldn't afford me any more!  The best money maker was cleaning as I charged a hefty £8 an hour (the average was about £6).  I used to take the baby with me and
arrive early to put up the playpen.  I could earn £16 for two and a half hours out of the house, which was quite good in 1992.  Twenty or so years on  I can't imagine working that hard physically for so little reward.  What it is to be young and springy! But it gave me some pocket money for things like new clothes and presents which gave me back a feeling of independence.  I found it hard to be reliant totally on Jim and felt I shouldn't spend any money on myself.  He couldn't understand that I felt it wasn't my money, he was fine with me spending it.  I don't think I would have such a problem with it now.  Isn't hindsight a wonderful thing? 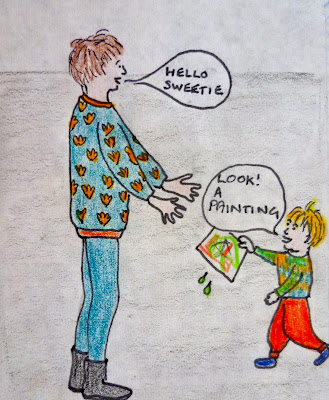 George's paintings were always very wet, and totally indescribable, even by George.  "It's a sort of a thing you get in one of those caves" he would say mysteriously.  Sometimes it would be of Mummy,  or a spider, but the painting was always the same.  I put them up and admired them anyway.  He was artistic in his little soul.

He still is, but now he does it by pressing keys on a computer and constructing huge complicated cities in Minecraft.  He is also writing a book so I guess that the encouragement to be creative paid off in the end.

My mum knitted that jumper. It was green chenille with orange boucle leaves.  It had a tendency to sag, so it was a lot shorter when I first got it. I thought I looked amazing in it with the green leggings to match.  I really should have known better, after all I lived through the 70s!

I know for a fact the dining room was never that tidy.  I have also missed off the crusts of weetabix on the yellow booster seat.

Marmite is one of those things that you either love or hate.  George and Sam loved it.  Sam still has crumpets with Marmite and honey when he feels he needs comfort food.  And yes I do mean together!

Everyone has their favourite nursery food I think.  I used to love Heinz baby dinner.  I have no idea what it was really called but I used to ask for it if I had been ill as my first proper food.  If I close my eyes I can still taste it, and the soft, white, thickly buttered bread we had with it.  I would happily eat it even now, but it is long gone.

I have just asked the grown up "boys" what they remember as the best nursery food, George says weetabix would be his, but it makes him ill nowadays, so he can't have it. After a short but intense discussion that results in a quick snack, they say unanimously sausages and pasta.  They do agree that Marmite and honey crumpets is a close second, so I wasn't too far out.
Posted by Strawberrysoo at 10:57