The Tooth Fairy, Playbus and the violin. 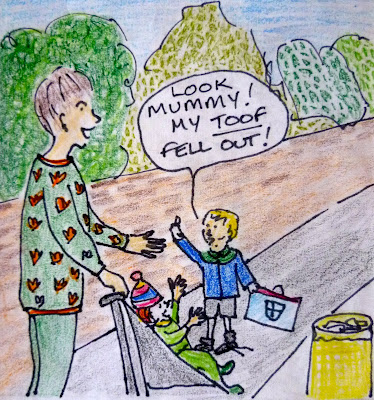 Every child used to get sixpence when their tooth fell out.  As sixpence is now virtually worthless at two and a half pence, or 4 US cents, most children seem to get about £1($1.60ish)  My kids used to get 20 pence but that is a while ago.  I still feel as if a 20p coin has a sort of similarity in mood to the old sixpence.  Anyway, my children got really excited when they had a tooth event, so like Father Christmas, the Tooth Fairy was a welcome visitor.  We used to wrap the tooth in tissue and secrete it under the pillow, where - lo and behold - in the morning would be a 20p coin!  Many's the time I have risen in the dead of night, having forgotten to make the exchange, and wrested the damp tissue from the child's resisting grasp.  Often I needed a torch to find the tooth which had escaped into the bed on its own.  We tooth fairies have a hard life.

A few years ago, I found mine and my sister's teeth at Mum's house when I was mooching about.  Following this slightly horrific experience, I came home and disposed of my children's baby teeth straight away.  Sometimes sentimental value can be taken too far! 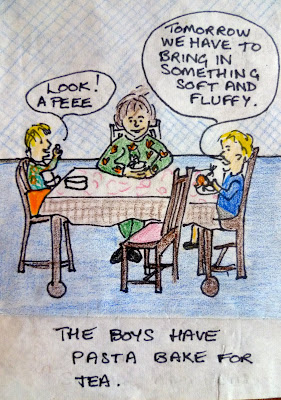 Show and tell at school.  I don't know if they still have it,  but I found it quite a trial.  A sort of parental competitiveness comes over you to provide something that will be just right, in that it will give your child status with his classmates, whilst giving you status with the teacher.

I know this is silly, but I also know that we all do this sort of thing.  It's like leaving the most cool book open on the table when you have guests.  "Dostoyevsky?" you say dismissively, "Yes I fancied a lighter book.  I found Schopenhauer a little depressing." No one is fooled. 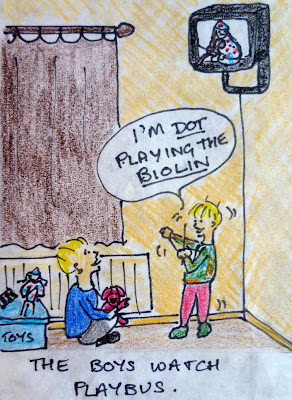 Playbus was a lovely BBC children's show.  The Dot Stop was George's favourite.  He was fascinated by the lady called Dot, who played the violin.  For his second birthday I dressed a Barbie in the white suit with coloured spots which Dot wore on Playbus and he had it as his present.  He was beside himself with joy.  (He was such a cheap date!) When he started school and was offered the chance to learn a musical instrument it was the violin straight away.  He learned the viola, as his teacher assured me it was less shrill and unpleasant to listen to in the early stages.  This turned out to be very lucky as he grew to be far too big to play the violin.

When he went anywhere he would find two sticks to pretend to play the violin with.  He was obsessed.  Now he can play reasonably well, Christmas carols and so on, even playing in the church band for a while.  On the whole I think the years of 'shrill and unpleasant' practise were worth it!


Here is one of my favourite pictures of George as a child is playing the violin with two spades on the beach.  I feel proud that I could find it when I looked in my photo filing!  So cute!