Puzzles and the park 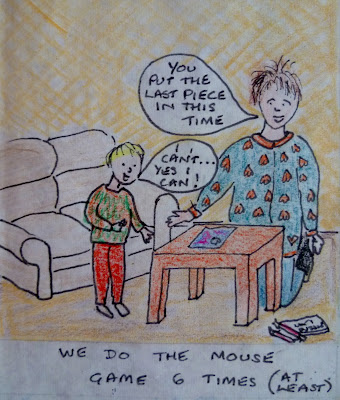 When George came home from playgroup, (or praygroot as he called it)  we would have lunch then games.  He loved watching puzzles come together.  He was particularly fond of an old fashioned puzzle of mice having tea in little frocks.  I think it was one of mine when I was small.

We had to do it over and over again, and after a while he would agree to try and put a piece in.  He was always excited if he could do it, but cried bitter tears of frustration when it was too hard.  He could see quite well where the piece should go but his dyspraxia made it really hard for him to place it accurately.  "I can't" was always countered by me saying "yes you can!" so eventually that was what he said - "I can't, yes I can". 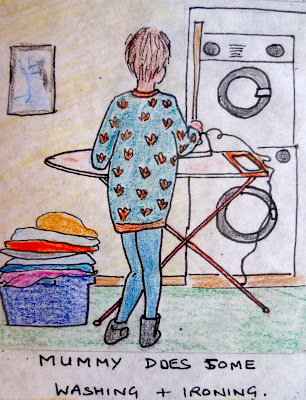 I was always behind with the washing and ironing.  I think it is a normal state to be in when you have kids.  Our lovely friend Ian had did some plumbing for us and moved the boiler out of the airing cupboard into the kitchen.  It was great because we could stack the washing machine and dryer in the airing cupboard instead of having them in the tiny galley kitchen.  Even better, because I could close the door, there was no chance of one of the kids putting the cat in for a bath!

I am ironing in the conservatory in the picture.  It was a wonderful room, north facing, so light but not hot, and full of flowers.  It used to be a dank and dark outside area as was common with Victorian terraces.  It contained a double concrete coal bunker (with resident massive spiders) and a manhole for the shared drain.  Moss and snails grew there in abundance.  We got our next door neighbours' agreement and roofed and fronted the area from their bathroom wall to ours with glass.  Their house was warmer and ours was transformed.  A win win situation no less! 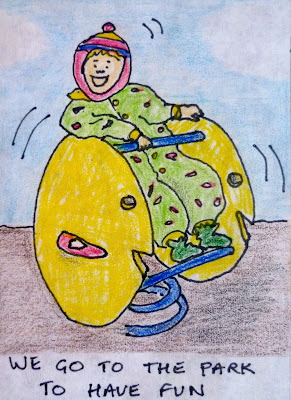 George loved to move around.  Especially bouncing. Despite regular bumps and bruises he adored going to the park which was luckily only a few minutes walk from our house. He found it exciting although he was an expert at falling off or out of any playground equipment.  It didn't matter that it had been designed by experts to be almost totally safe for his age group.  He didn't know that, so he fell out of it anyway in inventive and improbable ways.

He got stuck in this one.  Upside down.  I believe he was trying to get in on his own.  He also managed to roll down the slide, even though it was a curly one. I still cannot understand how.  I felt I had to go down the slide with him a few times every visit to show him how it should be done.  (That was my excuse anyway.  I would still do it if I could find a child to go with).

Like I said, being a parent of small children is a license to have fun in a way which adults normally can't .  I really miss being able to be silly without anyone giving me a strange look, or edging away.