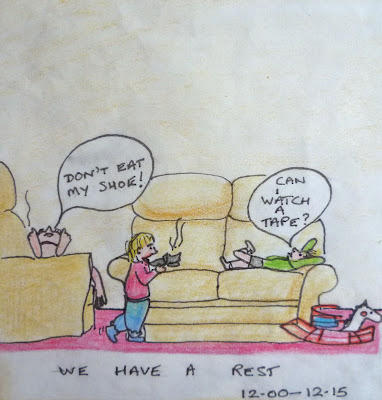 George had a real penchant for eating horrid things like shoes.  He was a very sucky and mouthy baby, he led with his tongue, a bit like our dog does now!  He used to dribble a lot too.  I thought it was teething or something, but no.

We had a lovely black cat called Kippen whose food was generally put out of reach, but his water was left on the floor all the time.  I had no idea the baby was drinking his water, but from the time he could get around, that's what he did.  Yuck.  He used to get tonsillitis about every 5 weeks for the 2nd year of his life.  We would trot off to the doctor every time his temperature hit 102 degrees, and be prescribed antibiotics.  What with Sam and his heart, and George and his tonsils, I used to be recognised by voice by the doctor's appointment secretaries. 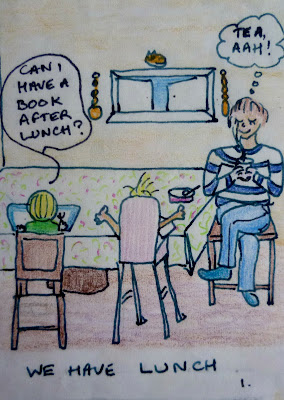 George never got another bad throat.

I don't know what it is about tea.  My Mum describes it as the universal panacea.  I would agree.  There are not many things that won't be helped by a really good cup of tea.  Even if things are going well, tea lifts the day to a new level.  This is especially true if you add cake.

Today at school we had a bake off, where all the staff were invited to bring and share a cake at lunch time. There were prizes for the prettiest and tastiest.  My friend and I provide the tea and coffee (or in some stubborn cases, hot ribena).  We have over 70 staff in our school and we had far more cake than we could decently eat in one lunch time.  We ate it all anyway.  I am not sure how many teachers suffered from the crash and burn of too much sugar followed by teaching a class of thirty.  Quite a few I would think!  I daresay we will find out tomorrow...  Mind you we got through at least 90 cups of tea and you have to hope that those who were properly fortified in that way would be able to manage the sugar low more easily.
Posted by Strawberrysoo at 09:54