Shopping and near misses. 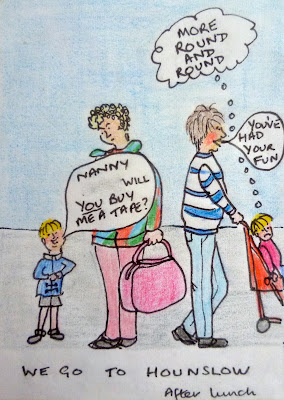 I used to take the children to Hounslow shopping centre from time to time with Mum.  We used to have tea (again!) in Woolworths and give the children a ride on the roundabout in the shopping centre.  The bargain was that they got off when asked without complaining.  A couple of times they made a fuss and we went back the next day and I wouldn't let them ride.  They only did it once or twice before they realised I meant it.  We didn't stay long, small children and shops really don't mix very well.

Sam, being a fairly mercenary child on occasion, would try his luck with any relative who might be willing to buy him something.  Not me though.  I was two things. Mean, and skint!

I was actually quite nice to the children, but playing games and reading and running round in the park is not interesting in cartoon form! 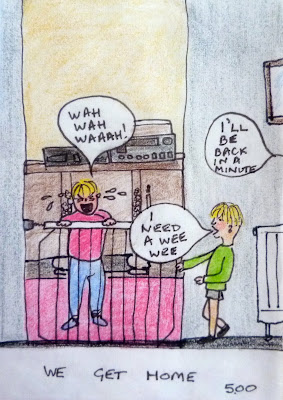 George knew no fear, climbing all over stuff and generally being intrepid.  Consequently he was often trapped in a safe room while I got the groceries out of the car down the road.  He really didn't like it!  One time he escaped under the stairgate which wasn't properly tightened.  He was just able to walk, but still very wobbly.  I had gone to the loo and when I came back he was gone.

My frantic calling produced a happy giggle from George, and there he was, teetering at the top of our very steep staircase, with a mouth full of tiny Lego bricks from Sam's room.  As  I approached he tried to run away from me and I just caught him before he tumbled down the stairs.  I did manage to get the Lego out of his mouth before he choked, and judging by his nappies, he didn't swallow any.  One of many near misses with a gung-ho but clumsy toddler!

I shiver when I look back!  After 10 years in a school I am now almost too conscious of health and safety!  I think we are better at preventing everyday accidents and things like stairgates are more carefully designed than 20 years ago.  I do wonder about how much we curtail kids' freedom to explore and get dirty though.  I am sure making mud pies is good for the spirit!