Sam had a lovely time at nursery school.  He was looked after beautifully by the teachers and dinner ladies.  In fact they looked after him better than I did.

He was very picky about food after leaving hospital and would only eat a few things which could be packed into a lunch box.  He wouldn't touch the school dinners provided either.  One day I sent him in (as ordered by Sam) with a satsuma and a mince pie and a carton of milk.  Calorie wise, it was probably OK, but the school were not impressed.  "We can't find Sam's lunch"  the dinner lady complained on the phone.  "We can only find a cake and an orange."  Oops.

After an embarrassing meeting they offered to cook my home made burghers with peas and rice and keep him a bottle of tomato sauce in the school kitchen.  Sam was on cloud 9 and started to put on weight again.  I was pleased but I had a sneaking suspicion I had been out manoeuvred by a 4 year old! 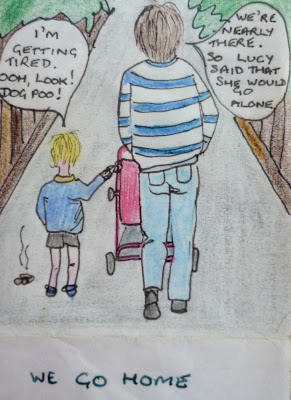 Why are children obsessed with poo?  I can't fathom it.  In my view it has no redeeming features at all.  Particularly when tracked through the house on the buggy wheels.

Sam's school had a uniform policy which was unusual for a state school.  The boys had to wear grey flannel shorts summer and winter.  Mainly this just resulted in chapped knees, but for Sam it was a disaster.  In really cold weather he was allowed to wear track suit trousers over his shorts on the way in, but he had to take them off when he was at school.  One day mid morning, I got a call from his teacher to say could I come and get him and to bring a hot water bottle.  Despite being sat on the radiator all morning, he was still a rather interesting air force blue.  After that he was allowed to wear long trousers.  Soon after, they changed the uniform policy.  Sam was pleased.  He never did like to be different!

The phone calls home were a regular feature.   I couldn't have held down a regular job even if I had wanted to.  I was really fortunate that my friends were willing to swap babysitting.   One was a nurse and had three under 5s to look after.  She would even come if Sam was a bit off colour.  On the downside, I babysat her three when the twins had chickenpox.  Not a fun evening!
Posted by Strawberrysoo at 09:12