Here we all are aboard the Condor.

Before we went on this trip, we asked if it was suitable for the disabled and so on, as we were not particularly mobile with Sam being a bit weak and easily tired, Clara being so young and Grandpa being diabetic and needing to eat at the right time.
We were told it was the best trip for disabled people as it was a lovely beach we were going to with nice food and pretty scenery.  I expect it was usually, but things did not go quite to plan.

We are not happy on the boat, despite the cheerful smiles and jolly sunshine in the photo,  because it was ridiculously hot and there was no shade at all.

Isn't it a funny thing, when a photographer tells you to smile for the camera, you do, no matter what you were doing just before? I have seen funeral photos that give the impression that everyone was at a really good party.  Mind you the only Irish funeral I have ever been to was a really good party.  Dancing and everything.

Shortly after this a young man struck up a charming if somewhat LOUD ditty with an electric guitar, and we began to realise that, what with the rather risque words and all, families and grandparents were not the target audience for the trip.

A little while later an unexpectedly heavy swell made it very difficult for the older part of our party to disembark onto the beach.  Nobody drowned or fell in the sea, so that was just exciting.  We had to jump just at the right moment when the little dinghy came up level with the deck, or wait until it had dropped 15ft or so and come back up.  It reminded me of those skipping games we girls used to play, following eachother into the skipping rope kept constantly twirling whilst we sang "Granny in the kitchen, doing a bit of knitting in comes "Susan"  or "Janet" or whatever the next person's name was and chases granny OUT!" Alternatively it could be compared to joining the *Hangar Lane Gyratory System in rush hour.

When we got to the beach there was no shade, which for us Brits un-used to any temperature above 20 degrees Centigrade was very challenging, and the food was inexplicably and hour and a half late which made Grandpa rather vague and difficult . 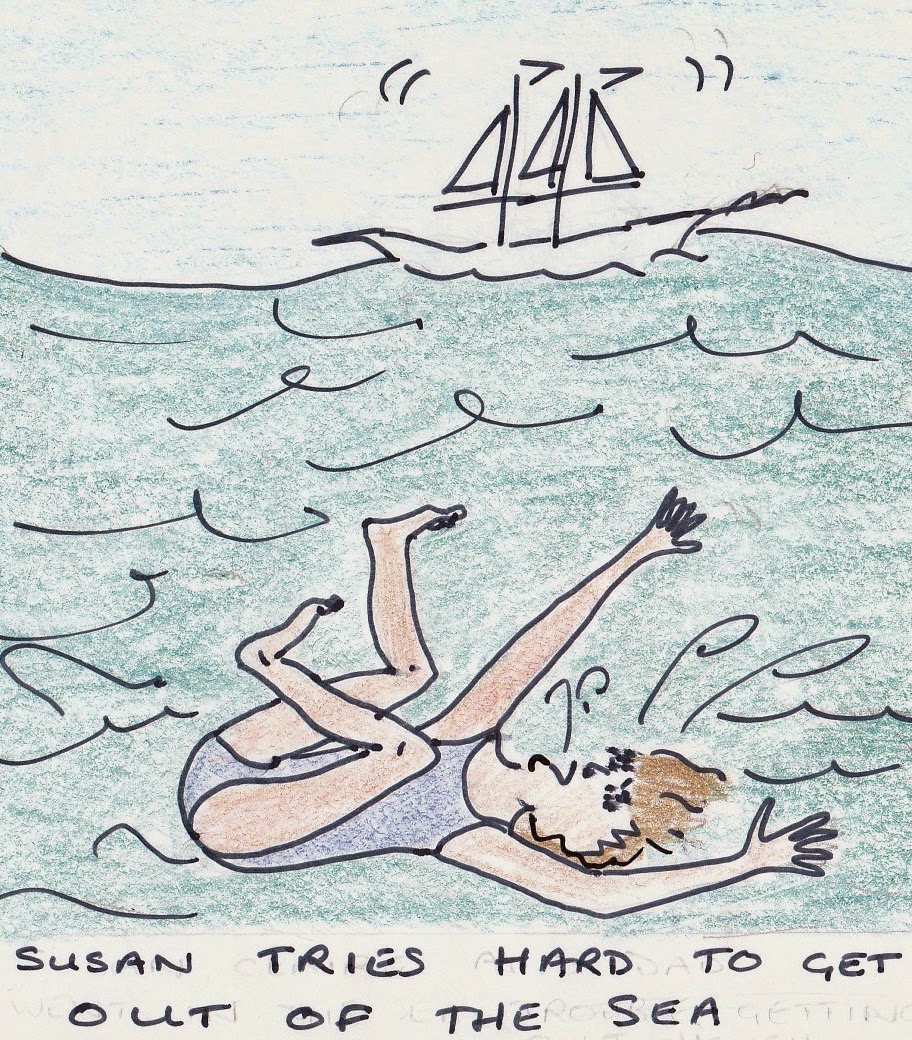 The beach was indeed lovely and we enjoyed a little
swim before the barbecue, but  the weather was interesting and the sea was not as calm as we (or the crew of the boat) had hoped...

It became clear that re-embarking (if that is the correct nautical term) was going to be a big challenge even for young agile sailors.  Luckily a bus was laid on, and we all began to climb the interminable cliff, the older ones carrying the children and occasionally Grandpa, with the even older ones trudging doggedly thinking of drinks and clouds with gentle rain and possibly even air conditioning, who can say?  At he top of the cliff we saw the bus laden with our more agile fellows disappearing round a bend in the road.  No one was there to ask if there would be another one, as the tour guide had legged it with the first group, so we waited and hoped.  It was about 40 degrees on the cliff top and the countryside was barren of the smallest bush or vegetation which might give shade.  We passed round the sun cream.  It said on the label "not to be taken internally" so we assumed we couldn't drink it.  We really wanted to.  Much later back at the house, Aunty Carol summed it up.

We were never in any real danger and this story is funny in retrospect.

My heart goes out to those people who are so desperate that they take their lives in their hands and travel in small boats across big dangerous oceans hoping they will survive with their children to enjoy a life free of fear.


*huge roundabout with no traffic lights and 8 lanes of fast moving traffic.  It is commonly known as malfunction junction and is britain's scariest junction.