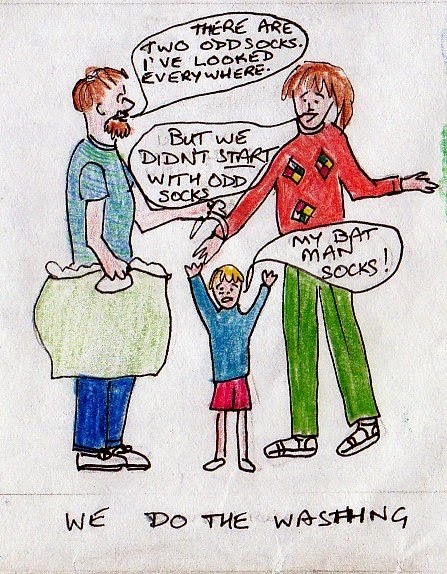 Lots of things happen to socks in our house.  There are never the same number of socks in the washing machine at the end of the cycle as there were at the beginning.  I think washing machines use electricity and odd socks to run their wash cycles. If for some reason they don't get enough socks to eat they sulk and refuse to work.

Secondly there is the dreaded sock beetle.  Jim often finds holes in both ankles of a pair of socks around the ankle bone level.  It looks for all the world as if something has eaten through all four layers of sock in one go.  The holes match in size and everything!  Sock beetles are invisible and immune to mothballs.  We did theorise that Jim has unusually sharp ankle bones, but when we checked, they looked pretty normal. 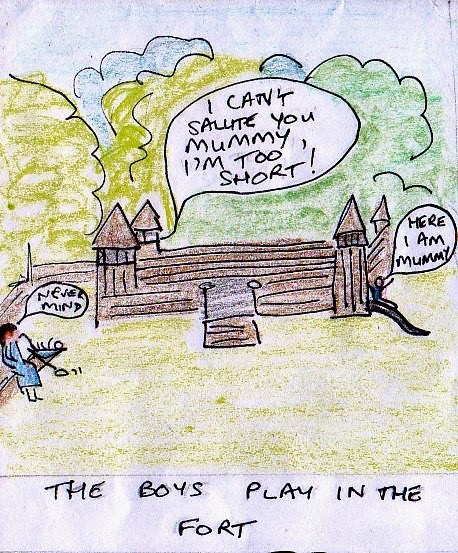 Thirdly, for some reason, young children dislike wearing shoes in the garden, but also prefer to have warm feet, so they wear socks out.  This also wears the bottoms out of the socks.  White socks go a very sorry shade of grey almost immediately and no amount of washing will shift it.  I think when the children were small we kept that town in China (where the world's socks are made) in business all by ourselves.

They had a wonderful fort for the children to play in at this hotel.  It was much bigger than I have drawn it, big enough for grown up people to play in with their kids, should they be so inclined, without banging their heads.  It wasn't really pushchair friendly though.  The boys ran off some of their energy and thoroughly enjoyed themselves. 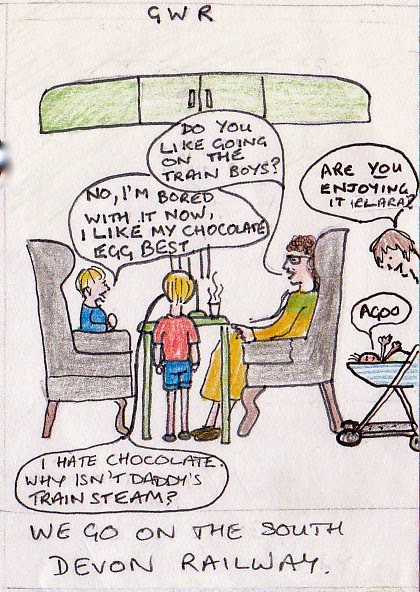 Strictly speaking all boys should love trains.  Ours did too, but mainly from the outside.  Once they were inside and going along, I suppose to them it seemed much like any other train journey, apart from the armchairs. In this picture, Jim was away in the restaurant car getting everyone snacks and coffee.  Such a helpful husband!

Personally I love steam trains.  I think they are the most romantic way to travel, and I adore the noises - hisses, hoots and whistles - which punctuate the journey.  I would jump at the chance to drive one myself, but it seems unlikely that I ever will.  The engines are so huge and exciting, all full of fire and steam and smoke.  I enjoy looking at all sorts of engines - there is a lovely steam museum in Brentford ( The London Museum of water and steam) where you can go and watch the giant water pumping engines in full swing.  Wonderful!  But you really need children as an excuse to go and visit such places, otherwise, somehow, it tends not to happen.

"Daddy's train" was the one he commuted up to London on every day.  It was not exciting. 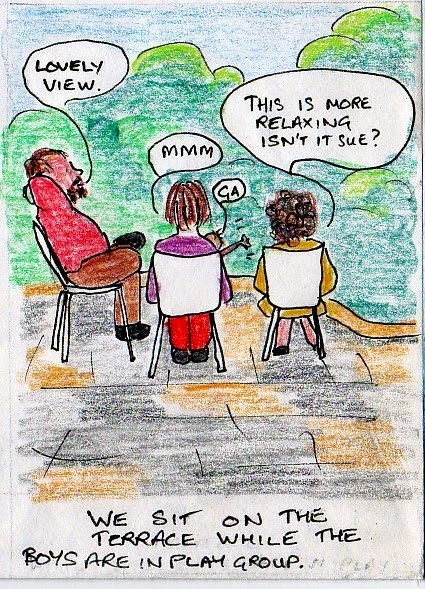 Jim's Mum tried to be soothing.  I wasn't feeling soothed and had to keep my teeth together to stop myself saying something unsuitable.  Clara had just cried for 20 minutes squirming on my lap, then dirtied her nappy and thrown up all over me.  It was more relaxing because Clara was happy and skippy again, but I smelled of baby poo and sick.  Never pleasant aromas.

The view was lovely though and we had the terrace to ourselves, mainly due to the screaming and the aforementioned aromas.  I think Jim got us a cup of tea just after this, which was very diplomatic of him.

Jim is a natural provider and nurturer.  His answer to any crisis is, "I'll put the kettle on", and "would you like to stay for dinner?"  This is often closely followed by a request for me to fix the crisis.  He has this charming idea that I can fix anything, and that a good meal will help.  He is very good at acting as support and commissary, so we make a good team.