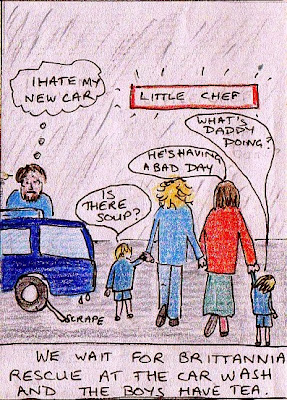 Back in the day, cars had exhaust pipes which rusted and fell off with monotonous regularity.

We had bought this car secondhand a few weeks before the holiday, thinking it would be just the thing for trouble free travelling. It was a seven seater Montego estate with fold down rear facing seats.  The garage must have seen us coming because it turned out to be a money pit.  We got to know the Britannia rescue call centre people quite well during the three years we had it.  The exhaust was the first in a long line of faults which cost us about £3k.  The wiring caught fire on the way to scouts one evening, the rear tailgate piston broke one afternoon in the supermarket car park, the suspension went, the brakes failed, we had a fuel leak etc etc etc.  Finally we gave in and bought a newer and more reliable car.

Paul loved his cars and was always terribly disappointed when they were broken, as they always seemed to be.  We always seemed to get cars that had been made on Friday afternoons when no one was trying! 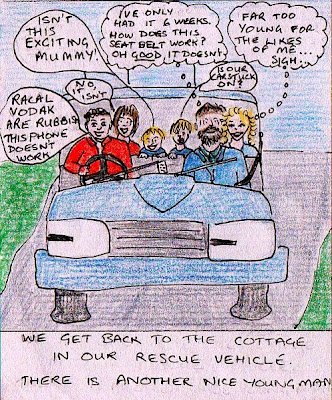 Mobile phones were in their infancy and only a few people had them.  The young man who arrived to tow us home had a very low opinion of the phone he was provided with. My sister was in the business at the time and she tried phones as a chat up line. Young men still have low opinions, but phones are generally better.  Carol was unlucky, the chat up didn't work.    She said later he was too young, but I think it was just sour grapes.

George the risk taker, a child with his glass always nearly full, found the whole thing a big exciting adventure.  Sam the worrier, who really took after his dad and had his glass permanently almost empty, worried about the car falling off the back of the tow truck, the fact that he had a lap belt on, the fact that Daddy couldn't do up his seat belt and the possibility that the young man might exceed the speed limit.  I said to George that it wasn't exciting, but actually I did find it rather fun.  It would have been most unwise to admit that to Jim and Sam though, so I kept quiet. 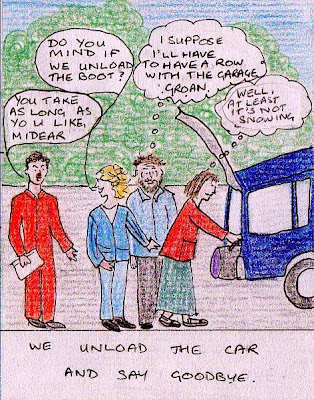 Cornish people are generally very friendly unless they happen to live in a picturesque town and have to put up with dozens of tourists tramping through the town wanting souvenirs.  Londoners feel the same when someone asks the way to the Tower of London for the 47th time when they are just trying to get to work.  I suppose that it is the same in any major tourist centre, although I have to say that Americans pretend to like tourists in a very believable way.  Maybe the American accent  sounds sincere to Brits - I understand that some accents are regarded as more sincere than others, so it might be that.

So anyway, Jim's day got a bit difficult, and he had to complain to the garage where we bought the car, as the exhaust was held together with duct tape and paint when they sold it to us.  I have tried this subsequently and it never works for long.  We got home safely and it didn't snow, for which we should be grateful.  It doesn't snow in July usually, but you never know.
Posted by Strawberrysoo at 10:17