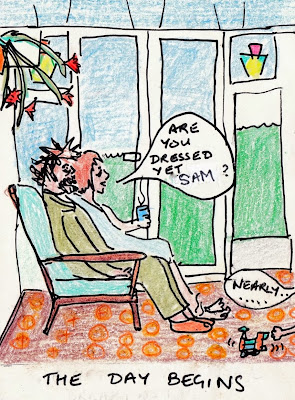 Here we are sitting drinking an early morning cup of tea in our lovely conservatory.  The carpet was an evil brown 1970s creation in very hard wearing wool...  I had it in my bedroom before I left home. The conservatory was a great place to wake up properly because it was light and warm.  Jim had hair in those days!
It was also ideal for growing houseplants and my epiphyllum never flowered so well before, or since.  I had two lemon trees in there, but I think they were outside for the summer.  I grew them from pips in my gin and tonic at the office Christmas party in 1979.  I remember stumbling to my desk (no hot desking then!) and inserting the pips into my silver leaf begonia's pot.  I scooped some water out of the goldfish bowl to water them in and by the beginning of January they were up and off.  They grew up and out and eventually had to be taken home due to size considerations...  They finally fruited in 1999 just the one lemon each.  Sadly after thirty two years of me carrying them in and out of the house every spring and autumn, they got too heavy so I gave up and left them out.  The winter of 2011 did for them. 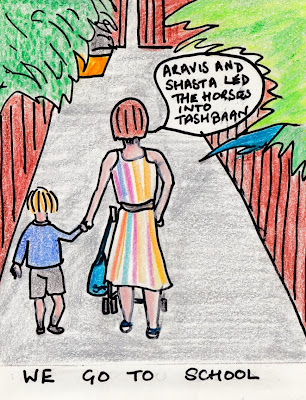 Sam was very, very good at procrastinating.  He hasn't changed a bit.

Sam, George and I are walking to school along the lane between the park and the hospital.  It was very pretty in the summer. Lots of birdsong.  Birdsong is one of the things that makes most people happy.  It's a shame that we are not more careful about keeping them safe.

I had read the Narnia stories so often by then, sometimes out loud, that I could remember them pretty much scene for scene.  This came in extremely useful on the way to school.  I think I was reading them as Sam's bedtime story and if he fell asleep half way through I could re-tell that bit on the way in the next day.

They were just starting to knock down the Victorian Nurses' Home judging by the yellow skip in the picture.  It was red brick, damp and tall.  I didn't miss it in the least.  I am sure it had rats. 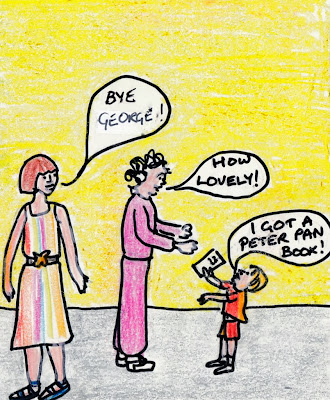 After dropping Sam off I took George to one of his playgroups.  They had a lovely lady of about 70 who wore tracksuits in shocking pink, with matching trainers.  George loved her, almost as much as he loved Peter Pan.  We had a dressing up box and both the boys dressed up all the time.  George had a little Peter Pan outfit, but he really preferred to dress as Hook with a plastic hook and sword.  Look at those trousers with that jumper -pretty psychedelic - I like it!