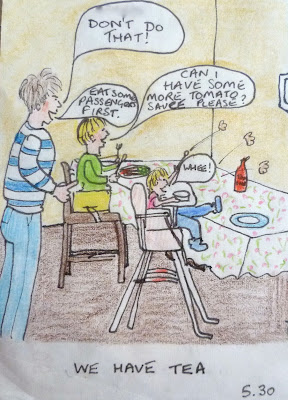 Peas were always passengers, because they flew on the aeroplane fork into the mouth.  George's food generally just flew into the carpet, Sam's hair, the wall etc.  We used to get through industrial quantities of tomato sauce.  It was difficult to find the really large bottles in the supermarket, so we had several in storage waiting just in case we ran out.  It was not a good idea to run out...

I still haven't got the knack of putting the conversation bubbles in the right order!

Although George had dyspraxia, we didn't know at the time, so I followed the rules and let him eat by himself, which was terribly messy.  He needed a good long soak to get the Weetabix out of the crevices and his hair every day.  I remember that at least half of his food accidents were just plain naughty throwing and playing.  Sigh. 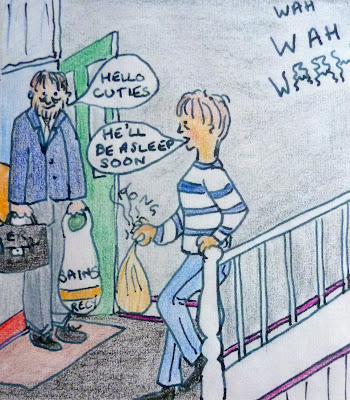 Jim used to go shopping on his way home every night to get tea for us.  I was only responsible for the nursery tea which was not interesting or rewarding.  George was not always a good sleeper especially if he felt that he could get more milk out of me or Jim. He so loved his milk!  I suppose he was building his enormous bones ready for later.

I was happy to let Jim cook in those days, although even then I had reservations about us eating separately from the children.  We couldn't have done much about it because Jim didn't get home until after they were in bed most evenings. Dinner was an important relaxation time for him so I let it slide until it became the norm.  We ate together at the weekends and on holiday, but it was always a bit stressful.  Kids simply don't enjoy long leisurely meals.  I wonder how the Italians do it?
Posted by Strawberrysoo at 14:35